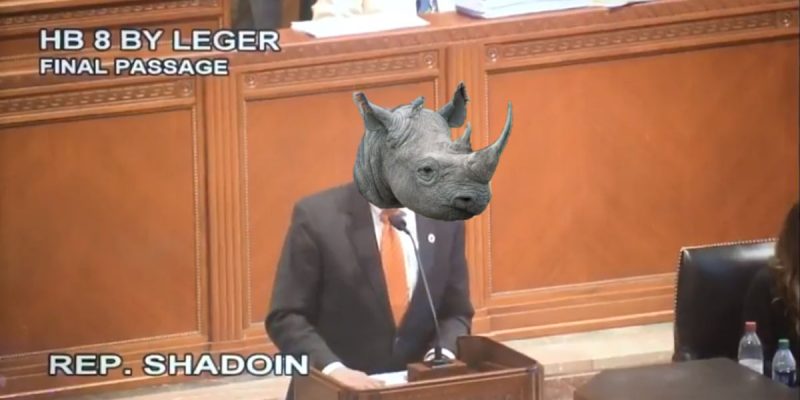 …as Rob Shadoin, who represents the ultra-conservative District 12 seat centered in Ruston, is reportedly retiring from the Louisiana House of Representatives in order to take some other form of employment as yet undisclosed.

Rob Shadoin, a Republican who represents Union and Lincoln parishes in the Louisiana House of Representatives, has announced his intentions to step down from his post.

Shadoin, who won the seat to represent District 12 in 2011 and was unopposed in 2015, said he was approached earlier this year about a job opportunity.

“I did not accept this offer back then because we were in the middle of several sessions and could not and would not make any changes then so that our District would not have an empty seat on the floor,” Shadoin said in a press release sent earlier this evening.

An attorney from Ruston, Shadoin said he and his wife Carol have prayed about the job opportunity for months.

“We have asked our Father for His guidance as we deliberated this and have not made this decision lightly. At this stage and age of my life, I must now make some significant changes which I believe will be beneficial to my family and me.”

Shadoin said he will formally announce his resignation at some time in the next two weeks.

“I am making this known ahead of time to give as much advance notice about the impending vacancy in our House seat so that those who might be interested in this will have time to think and pray about a decision to run,” Shadoin said.
——-
Read this week’s Gazette for more on this developing story.

The members of the Louisiana House Republican Delegation are assuredly breathing a sign of relief at the news Shadoin is going away. His abuse of the delegation meetings by disclosing all of the goings-on in them to Gov. John Bel Edwards was a very sore point, so much so that it came to a head earlier this year. And in public Shadoin was no better friend to the delegation, voting against the majority of the Republicans on taxes so often that he was challenged, successfully, to present a single tax increase he had opposed. But Shadoin did vote against a tax increase this year – he voted against delegation chairman Lance Harris’ one-third cent sales tax hike on the basis that Harris’ bill didn’t raise enough revenue from the people of Louisiana.

Shadoin’s misuse of Scripture was perhaps the most egregious of his legislative sins, as he commonly would quote from the book of Matthew about the imperative of giving aid to “the least of these” – as though the forced separation of wealth from the citizenry in order to fund an ever-increasing welfare state is equivalent to the voluntary charity Jesus called for in his teachings. That’s a fallacy common to the Left, and yet Shadoin drank deeply from it while conceiting himself as a statesman.

We’re well rid of him if he’s telling the truth about departing the Legislature, though the reality is Shadoin was probably the single most high-profile target of opportunity for conservatives seeking to make improvements in the makeup of the House of Representatives. He may be leaving on his own terms, but he’d likely be leaving after the 2019 elections in any event.

UPDATE: Because OF COURSE, guess where Shadoin is heading in his new job?

A north Louisiana lawmaker says he’s resigning his state House seat to work for the Department of Wildlife and Fisheries.

Ruston Republican Rep. Rob Shadoin tells The News-Star he will work as deputy counsel in the agency under another former lawmaker, Secretary Jack Montoucet.

Shadoin is in his second term representing Lincoln and Union parishes.

He is one of the most moderate Republicans in the House, often at odds with members of his party. He’s been a consistent ally of Democratic Gov. John Bel Edwards, supporting Edwards since the 2015 election.

Shadoin says he’d been talking with Montoucet about the job for months, but waited to leave the House until lawmakers stabilized state finances. He cited 10 legislative sessions since 2016 as taking their toll on his solo law practice.

Shadoin, who was pretty likely to lose re-election next year, gets shuffled onto the state dime to get paid by Jack Montoucet – another big-government Louisiana politician representing a conservative district.

You didn’t think he was leaving the legislature for a corporate job, did you? Surely you jest.

Interested in more news from Louisiana? We've got you covered! See More Louisiana News
Previous Article BATISTE: Is LaToya Cantrell Setting Herself Up As NOLA’s New Race Madam?
Next Article APPEL: Let Me Throw Cold Water On The Exultations Of Louisiana’s Legacy Media…