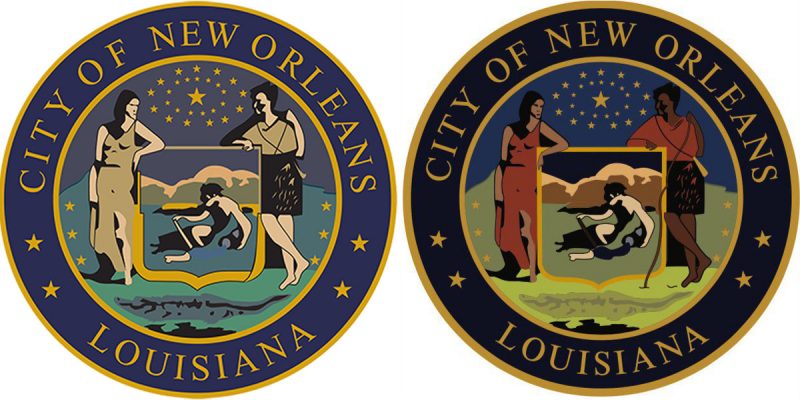 LaToya Cantrell, the new mayor of New Orleans, revised the official seal for the City of New Orleans in a purely racial manner. Late last week Cantrell posted the city’s seal on social media, asking the Twitter universe if it noticed anything different. The seal looks unchanged, except that two figures featured on it now have brown skin, darkened from a lighter, palish color – and the blue field on the outside appears to have been darkened as well.

The two darkened individuals represent Native Americans who inhabited the region when French colonists arrived. Cantrell’s account did not explain why the new mayor erased Native Americans from New Orleans’ history. A second tweet said, “We live in a diverse city, and now our seal reflects that. #intentionality #inclusion.”

This makes no sense. The city seal, as it has been in existence since 1852, serves as an homage to the territory’s inhabitants before Europeans arrived. It never featured pictures of residents. Black people were not excluded from this, they were not living on the land that became New Orleans as the “Indian brave and maiden” were.

Like the previous mayor, Mitch Landrieu, evidently Cantrell and her Communications team are too dim to grasp that wiping out white or Native Americans and replacing them with black people is the exact opposite of inclusion and diversity.  Adding a black figure to the seal and adding a white figure with it would be true diversity, true inclusion.

Also like Landrieu, Cantrell is a democrat, so the local media will ignore any points of hypocrisy and ignorance and they will never question her about these race baiting actions. Race doesn’t matter in this case, because the media and leftists only care when Republicans do things they can use to accuse (and convict) the conservative of “being a racist.”

Cantrell started her term making race an issue with the singing of the Black National Anthem at her inauguration on May 7, 2018, and giving out beads with a black fist, resembling Black Power, holding a key to the city.That’s no subtle message.

Imagine if New Orleans elected a white mayor, not a Mitch Landrieu passe blanc liberal, but a white conservative man. What would happen if that white conservative man played the (fictitious) “White National Anthem” at his inauguration and changed the city seal to feature white people instead of Native Americans or black people?

The “minority”–in quotes here because black people in New Orleans are the majority–always preaches acceptance while trying to gain power. Once they are in power, they seek to destroy the former majority.

Nationally, liberals demand equality for minorities.  Look at the ordeal with gay marriage in 2015, now google the percentage of gays in America, spoiler alert: 4.5%.  Liberals demand representation for minority groups. Yet when all politics are local, and a major Southern city like New Orleans has white people as the minority, the majority ignores their commitment to equality. The black majority refuses to help the white minority and tries to prevent the minority from even having a seat at the table.

The City of New Orleans’ seal has been slightly altered and modified over the years.  Many lifetime residents are not familiar with it. The issue is that in an instance like this where the mayoral administration incorrectly and improperly interjected race into history, it shows their true colors as race pimps or, in this case, race madams.

It’s much easier to to focus on race, not the problems of the city such as crime, streets, and flooding.  But the true insult in Cantrell changing the seal is that it slights Native Americans, not white people.  A modern day version of Buffalo Soldiers wiping out the red man.

The unintended “intentionality” with changing the seal is ignorance and divisiveness.