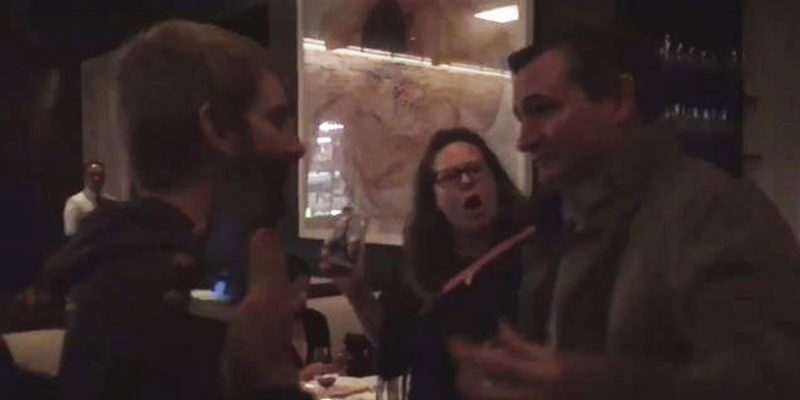 This showed up on a Twitter page entitled “Smash Racism DC,” which seems awfully self-congratulatory about the fact that they’ve probably insured the loss of their preferred candidate in the Texas Senate race coming up in six weeks. It’s a video of Cruz, who is a longtime friend and vocal defender of the current Supreme Court nominee Brett Kavanaugh, being harassed and berated on his way out of Fiola, a fancy restaurant in Washington, by a mob of millennial leftist thugs flashing middle fingers at him and droning “We believe survivors!” as though such a chant has any particular meaning in the case of obvious fabricators Christine Ford and Deborah Ramirez – who never breathed a word about their supposed bad sexual experiences with Kavanaugh until his nomination was all but assured.

Here’s the video. You might wish to partake of Dramamine or Pepto Bismol before watching it…

Cruz has been friends with creep Kavanaugh for 20 years. Now Cruz is on judiciary committee hearing his testimony.

None of the patrons in the restaurant come to the defense of Ted and Heidi Cruz, which is unfortunately the recent norm in such incidents. Time was when a disruption such as this occurred there would be consequences – and relatively severe ones – to the people believing it’s OK to disrupt ordinary citizens, much less prominent Americans, as they recreate themselves in places of commerce. That time has passed, as we’ve seen; there is no fear of arrest or any other negative result from leftist agitators disturbing normal people in restaurants anymore. The Sarah Sanders and Kirstjen Neilsen incidents prove that.

Cruz comports himself entirely well on the video, refusing to take the bait offered by his tormentors and in fact telling one of them “God bless you” as he sticks a middle finger in the Senator’s face, and then politely admonishes another who is blocking Heidi Cruz’ exit from the restaurant, and he manages not to respond when yet another, who is biologically male, declares “Beto is way hotter than you.” It’s another in a series of strong performances by Cruz, who utterly demolished Democrat congressman Beto O’Rourke in Friday’s debate by pointing out time and time again how out of touch O’Rourke is with the decidedly conservative Texas electorate. Polls in the race are quite varied in result; one recent survey had Cruz with a comfortable nine point lead, while another actually put O’Rourke ahead. It would be difficult to imagine that Cruz’ dignified performance in this soon-to-be viral video, contrasted with O’Rourke’s serial gaffes insulting Texas law enforcement officers, won’t insure the former poll is the more accurate one. After all, Cruz’ supposed Achilles heel is likability; well, if he isn’t a nice guy then how does one explain the actions on this video when an all-out brawl would be thoroughly justified?

As for Smash Racism DC, it’s another one of the usual Antifa front operations funded by the usual leftist billionaire wannabe revolutionaries. Here’s another self-congratulatory agitprop press release glorifying their attack on civility in politics…

“Activists from Smash Racism DC, Resist This, DC IWW, members of DC Democratic Socialists of America, Anarchists, and members of the LGBTQ community interrupted Ted Cruz’s peaceful meal,” antifacist organization Smash Racism DC, which posted the videos, said in a statement. “While our interruption does not compare in scale to the interruptions his actions as a Senator have had on millions of American lives, we hope that it reminds Cruz and others like him that they are not safe from the people they have hurt.”

And another statement even more chilling…

This is a message to Ted Cruz, Bret Kavanaugh, Donald Trump and the rest of the racist, sexist, transphobic, and homophobic right-wing scum: You are not safe. We will find you. We will expose you. We will take from you the peace you have taken from so many others.

They actually believe they’ve done a good thing by assaulting a U.S. Senator. It’s hard to imagine they didn’t just give Cruz six more years in office. And it’s difficult to believe that the more America sees what sort of people they’re being asked to turn the levers of power over to should this purported Blue Wave materialize on Nov. 6, the more the country will turn away in horror and disgust. After all, there is no hiding what it is the Democrats offer. Not anymore.

Interested in more news from Texas? We've got you covered! See More Texas News
Previous Article BATISTE: Is LaToya Cantrell Setting Herself Up As NOLA’s New Race Madam?
Next Article The Culture Of Competence, And The Culture Of Everything Else