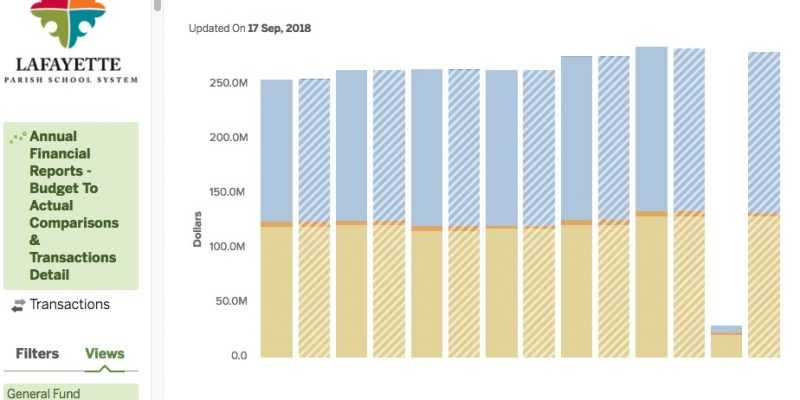 The Lafayette Parish School System (LPSS) is the first local government entity in Louisiana to provide financial transparency to the public online. It launched a new website, LafayetteCheckbook.com, on Tuesday, just months after the school board’s unanimous vote to create it.

Justin Centanni of Lafayette, a school board member from District 6, demonstrated how the website works Wednesday to a room full of members of One Acadiana, the local chamber of commerce. Centanni said he received nothing but positive feedback.

LPSS “saw the value in having transparency in its fiscal affairs,” Centanni told Watchdog.org. “All of the information provided on the website is public information anyway. Why not provide it to the public online and provide easy access to it?”

Centanni said school system members were excited earlier in the year after legislation to modernize the state’s checkbook website passed unanimously in both chambers and was signed into law on June 8. The LPSS takes special pride in its area representative, he said, House Speaker Taylor Barras, R-New Iberia, for his role in working with Rep. Barry Ivey, R-Baton Rouge, and Sen. Rick Ward, R-Port Allen, to get the bill passed. Barras had been trying to get a fiscal transparency measurel passed since 2016.

The final legislation that passed was a consolidation of three proposed bills that were addressed by budgetary committee members during the first special session, the regular session, and then the second special session this year.

Rather than wait for the Legislature to pass the bill in June, Centanni said that the LPSS decided to contract with Open.gov directly to get started on creating its own website. He demonstrated to taxpayers Wednesday morning how every financial transaction can be viewed down to the check level, just like an individual viewing details of a bank account. He showed how users can find the cost of developing the website, he noted, for which LPSS paid Open.gov $34,000.

LafayetteCheckbook.com provides tools and instructions on how to navigate the site, including how to view graphs, legends and other features. It states that users can “explore budget and historical finances in a simple graphical user interface.”

The menu allows users to view specific data on the side panel, such as information about tax revenue, departments, expense type, or any combination of them. Users can also specify which breakdown to view by graph or table, and filter data by the hierarchical relationships of Funds, Departments, and Account Types.

The website presents information through five graph types: an area graph, area graph by percentage, line graph, pie graph, and a table. Users can also share each view on social media or through email. They can also download the displayed data in a .csv spreadsheet and .png image formats, the website states.

The statewide movement behind fiscal transparency was led by a coalition of community and business leaders urging lawmakers to update the antiquated LouisianaCheckbook.com.

“The best way for government to win back the trust of the people is to shine a little light into how they are spending the people’s money,” the group said in a joint statement.

“I applaud LPSS for taking the lead in opening its books to the public with transaction level detail,” Gifford Briggs, president of the Louisiana Oil and Gas Association and a leader of the transparency effort, told Watchdog.org. “There is no better way to establish trust with the public than to be completely transparent in how you are spending public dollars. I look forward to seeing other agencies, local and state, following in LPSS footsteps.”

Another transparency advocate, Daniel Erspamer, CEO of the Pelican Institute, also applauded the LPSS. The Institute is calling on “all local government entities across the state to embrace transparency and prove to Louisianans that their hard-earned money is being used thoughtfully and efficiently,” he said.

The Lafayette Checkbook, now like the Louisiana Checkbook, gives taxpayers an unprecedented look into its finances to better understand how local officials are spending their money. The purpose behind fiscal transparency, the Checkbook coalition says, is that, “Taxpayers have a right to know how government is spending our money. It’s basic common sense that if government is going to ask us to pay taxes that we should be able to see how those funds are spent, in real time without having to navigate complicated processes.

“This should be true in any state, but it’s particularly important here in Louisiana, given our history of corruption and wasteful spending. After all, sunlight is the best disinfectant, and providing this level of transparency is the next, critical step to rebuilding trust in government.”

Centenni told Watchdog.org, “It’s hard to conceive who would be against it.” He added that he’s already had a call from St. Tammany Parish officials who want to learn more in order to consider how to develop their own site.