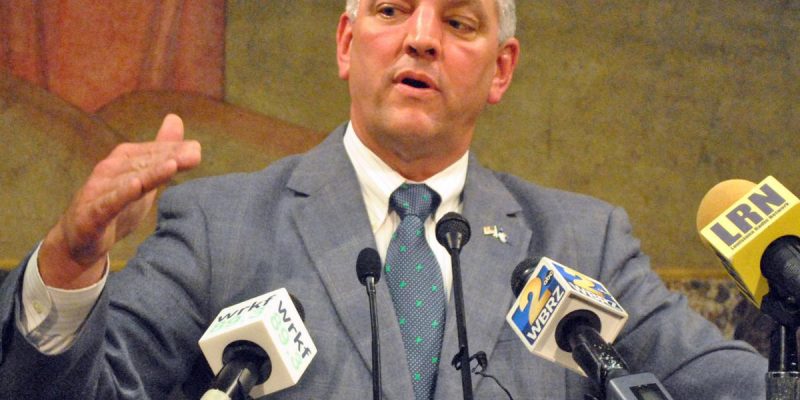 Louisiana Gov. John Bel Edwards pushed back forcefully Thursday against accusations that his administration had in some way concealed a budget surplus as a way to fool the Legislature into retaining part of an expiring sales tax, saying that the extra $300 million revealed last week was simply the result of higher than anticipated tax collections reflecting a better than expected economy.

At a news conference Thursday, Edwards presented the news of the surplus as a piece of unambiguously good news.

“What this means is that the economy performed better than [the Revenue Estimating Conference] predicted, which is obviously what we always had hoped would happen and worked to try to facilitate,” he said. “There were more jobs, people brought home better paychecks and businesses were more profitable. And obviously it should go without saying, this is the kind of progress we want to see, especially when you consider where we were as a state two years ago.”

The governor pointed out that the REC, a panel that includes Commissioner of Administration Jay Dardenne, Senate President John Alario, House Speaker Taylor Barras and an economist, worked together to come up with the forecast for the 2017-18 fiscal year, and insisted that it wasn’t a matter of his own staff putting out low numbers to try to strongarm lawmakers into keeping taxes higher than was needed.

“There’ve been some erroneous and quite silly statements actually made that suggest that somehow the Division of Administration is privy to inside information, and that is just unequivocally false,” he said. “There’s always uncertainty around revenue projections, particularly in the corporate arena, which has been very volatile over the last number of years. And this time around it was especially volatile and uncertain because of federal income tax law changes.”

Edwards, a Democrat, also accused his critics of fundamentally misunderstanding how budgets work, arguing that there was no connection between the surplus in the 2017-18 budget and the need for three special sessions to complete the 2018-19 budget. After months of wrangling about whether to keep any or all of an expiring one percent of sales tax, the Legislature finally settled on retaining 0.45 percent in late June, making the state sales tax rate 4.45 percent.

After the sales tax battle, Edwards had sought to portray the compromise as a tax cut, while his critics saw it as a tax increase because absent any action, the state sales tax would’ve automatically declined to 4 percent.

“We were able to do all of that work and still reduce the tax burden on the state of Louisiana by $600 million,” Edwards said Thursday. “Corporate taxes and personal income taxes appear to be higher than forecast, and we hope this is an indication of a continuing trend where we’re going to see the economy improve.”

A significant amount of the surplus is directed to specific purposes, such as the state’s rainy day fund, and the remainder comes with some constraints as well. But Edwards spoke generally about some of the priorities he felt that the state should look at.

“Surplus dollars can be spent on capital outlay projects and the comprehensive state capital budget, new highway construction for which federal matching funds are available, coastal restoration projects and the retirement of general obligation bonds,” he said. “Surplus cannot and should not be used to grow government. But it does make it possible for us to address the infrastructure needs that we have across the state of Louisiana with actual cash on hand, rather than having to incur debt in order to pay for those investments.”

Edwards was criticized this summer for vetoing several capital projects in districts represented by rival Republican legislative leaders while leaving funding for most projects in Democratic districts.

Left unaddressed by the governor were concerns that the REC might be once again underestimating revenue for the 2018-19 budget. If the state once again runs a surplus of hundreds of millions of dollars, it will likely leave taxpayers wondering why the expiring sales tax was not allowed to fall off.

“It’s pretty clear Louisiana taxpayers were conned into thinking the state was broke when it wasn’t,” John Kay, state director of the Louisiana chapter of Americans for Transparency, said last week after the surplus was revealed. “Those surplus funds belong to the taxpayers, not the government. If it isn’t returned to the taxpayers with an apology note, it should be used to pay down state debt.”