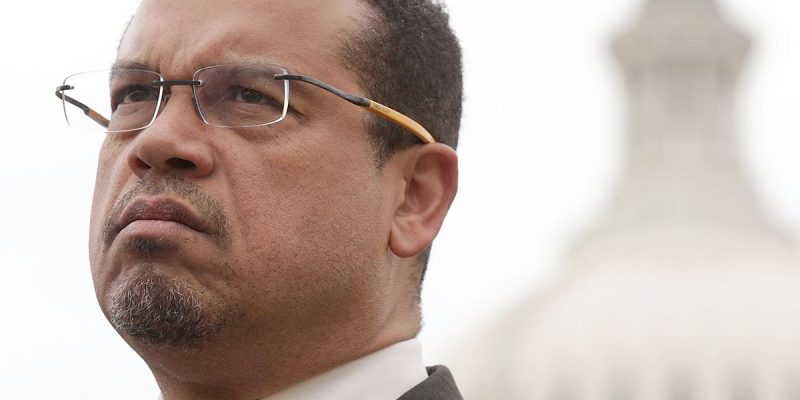 Karen Monahan alleges that she was brutally beaten by Minnesota Democratic Senator Keith Ellison. She posted a picture of her hospital record online, which was repeatedly taken down by Twitter.

@MSNBC @CNN @CBSNews
Here is one of my Dr visits stating the abuse that occurred.
It amazes me the measures people have to take for their humanity to be validated. #metoo pic.twitter.com/7J0U5qwH4n

Please read, if you care about my mother please share.I love you momma, you wont have to stand…

My name is Austin Monahan and I am writing this letter on behalf of me and my brother.
My brother and I watched our mom come out of pure hell after getting out of her relationship with Keith Ellison. For several months we knew something wasn’t right and couldn’t figure it out. When we asked our mom if everything was ok, she told us she was dealing with some stress and would be ok.
In the middle of 2017, I was using my moms computer trying to download something and I clicked on a file, I found over 100 text and twitters messages and video almost 2 min long that showed Keith Ellison dragging my mama off the bed by her feet, screaming and calling her a “fucking bitch” and telling her to get the fuck out of his house. The messages I found, were mixed with him consistently telling my mom he wanted her back, he missed her, he knew he fucked up and we wished he could do things different, he would victim shaming, bully her, and threaten her if she went public. I text him and told him I know what you did to my mama and a few other things.
I met up with my mom that night and asked her what happened. She said nothing happened until I told her I saw a video and hell of a lot of messages saying something different. She finally talked. My brother and I were so angry and hurt for our mom. We were ready to go public but our mom begged us not to and she along with others convinced us it wasn’t in our moms best interest.

I saw message after message through out all that time, where my mom was telling him she wasn’t going back to him but still saw his humanity and offered restorative justice. I honestly don’t see how she would offer him that, but thats her choice.

Sitting all this time, watching what our mom went through and not being able to say or do anything was hard as hell. None of you know the hell our family has gone through. I don’t think half of you would even care. We watched her so called political friends stand by say or do nothing. People had an idea what happened and never reached out to my mom. The same people who are posting about social justice are ready to smear my mom, protect a person who abused her and broke the law. You think we give a shit about a politics when we saw what our mom went through? She may not matter to none of you, but she is our mom, our kids grandmother and she is actually someone. There is a lot more he has done to my mom and others that we saw in the text but our mom can decide if and when she wants to tell the world that part.

Whether we saw the video or read all those messages, we still would have believed her if she had told us. #Ibelieveher

My mom has always tried to protect me and my brother. She doesn’t have to protect us anymore and we aren’t letting her stand alone. When we found out our mom was planning on sharing her story, that is all we needed to hear for us to share ours and stand with our mom. You want to smear someone, try to lie about a person who didn’t do shit to deserve the ongoing emotional, physical abuse, smear me and my brother.

I use to believe the Democrats were the ones who would stand by a person who went through this kind of abuse, now I know both Democrats and Republicans could care less when it comes to violence toward women and girls.

I have learned a lot about how patriarchy has shaped me as a 25 year old through all this. I just became a father and I am working on how patriarchy influenced thoughts ad decisions I have made as a young man so I can teach my son better. I am starting today by standing with my mom, my sons grandma. It is not just on women and girls to speak out, it is on men to do some of the emotional work. I’m not here to prove shit to anyone, I’m just stating facts. You can take it or leave it.
#Iammanenough

Mom, I am sure you are getting contacted about this post. Just know we love you and we are standing by you.

Since then Karen Monahan has described how she’s been ignored, smeared and attacked by the Democratic Party for coming forward and speaking out against DNC co-chair Keith Ellison whom she claims beat her on numerous occasions.

I was asked if my party @MinnesotaDFL @DNC believed me when I broke my silence regarding @keithellison. Here was my response to them. https://t.co/VtT6uOCLuA

Monahan’s account, Ellison’s critics argue, is consistent with those of Amy Alexander, another woman allegedly abused by Ellison. A recording of a 911 call in 2005 was released when the abuse story broke, and Alexander claims Ellison tried to silence her about the abuse during his run for Congress.
America First Activists have mobilized and are calling on House Ethics Committee leader Bob Goodlatte to offer the accusers of Keith Ellison the same chance to share their stories publicly, as the Senate has offered to Judge Kavanaugh’s false accuser, Christine Blasey Ford.

Flood Bob Goodlatte’s office & use script to guide you.

Give your name & introduce yourself as a concerned American pic.twitter.com/3kkImrkiNn

Members of the public are asked to SIGN THE PETITION that requests the House Ethics Committee offer Keith Ellison’s accuser/s the opportunity to give their testimony to Congress.

After refusing to comment, the Democratic National Committee told NPR it was looking into the matter: “These allegations recently came to light and we are reviewing them. All allegations of domestic abuse are disturbing and should be taken seriously.”

Nothin has come from “looking into the matter.”