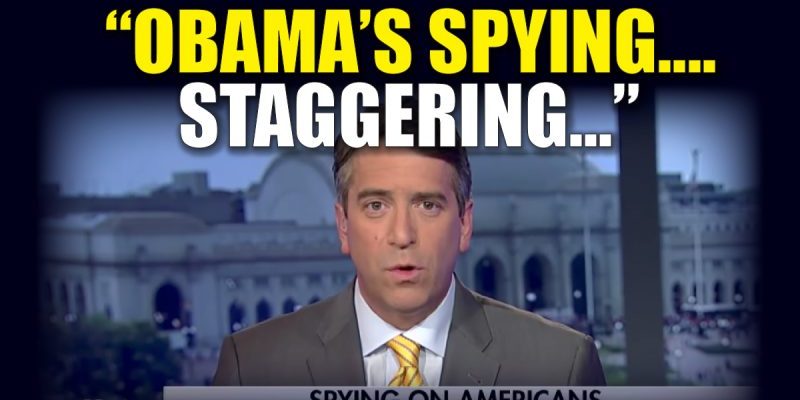 Obama recently claimed, “It shouldn’t be Democratic or Republican to say that we don’t threaten the freedom of the press because they say things or publish stories we don’t like. I complained plenty about Fox News, but you never heard me threaten to shut them down or call them enemies of the people.”

But the only true phrase in his statement is that we “never heard” about his threats and attempts to shut down the media.

When the Obama Justice Department (DOJ) investigated leaks about North Korea, it completely spied on Fox News’ Washington correspondent, James Rosen. The DOJ accessed Rosen’s security badge records to track his time at the State Department and traced his phone calls. They even snooped on his personal e-mails after obtaining a dubious search warrant. The administration referred to Rosen as a possible “criminal co-conspirator” in the leak.

According to Yahoo, an FBI agent accused Rosen of breaking the law, even though his own affidavit described behavior that “falls well inside the bounds of traditional news reporting.”

The Obama administration renewed a Bush-era subpoena against James Risen of the New York Times in 2011 allowing federal investigators to spy on Risen’s credit reports, personal bank records, and track his phone.

Not to mention CBS News reporter Sharyl Atkisson’s  numerous claims about the Obama administration spying on her.

And these are only a few examples of some instances we barely heard about in the media– anywhere.

There’s much more that we don’t know.

Not to mention spying on non-U.S. media.

In 2015, the German parliament investigated whether the Obama administration spied on its journalists in Germany– and also “interfered in the exercise of the free press under the guise of U.S. national security,” CNN reported.

Germany’s intelligence coordinator, Günter Heiss, testified before a parliamentary investigative committee of the German parliament, the Bundestag, focusing on the activities of the U.S. National Security Agency’s (NSA) spying on Germany.

In 2013, the German magazine Der Spiegel, using information found in files made public by Edward Snowden, first reported that the NSA was intercepting German Chancellor Angela Merkel’s cell phone communications. CNN also reported on the news that the NSA “was eavesdropping not only on Merkel, but also in some capacity on Germany’s free press, specifically Der Spiegel.”

Obama spying on anyone anywhere was nothing new, apparently.

Lee Smith of Tablet Magazine writes that the Obama White House had been spying on its political opponents and leaking classified information about them long before Donald Trump won the presidential election last November.

In December 2015, The Wall Street Journal revealed that the Obama administration used the NSA to cast a wide net of surveillance around not just Israeli officials and diplomats, but American lawmakers who were friendly towards Israel as well as Jewish-American groups.

And these are only a few facts we do know.

We don’t know a lot more– which should be troubling to everyone.