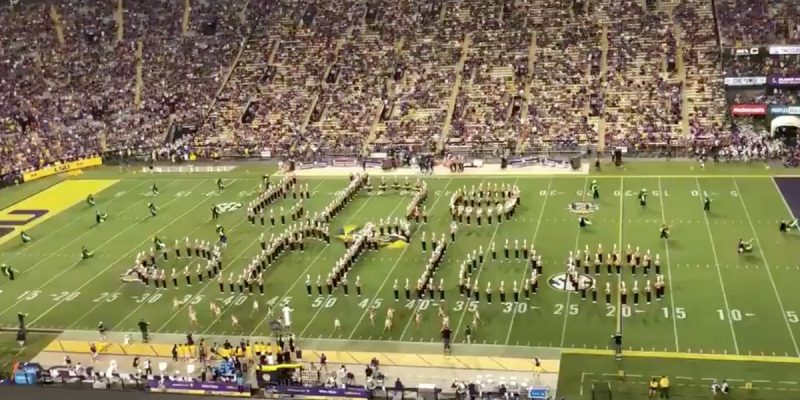 At halftime of last Saturday’s 38-21 victory over Louisiana Tech, LSU’s Golden Band from Tigerland put on quite a noteworthy show – and the attention that has followed has the band rubbing social-media elbows with the stars.

The show, entitled “Binge Watch,” included themes from various TV shows such as ‘Game of Thrones,’ ‘Parks and Recreation,’ and ‘The Office.’

Footage of the LSU band’s performance went viral last weekend, with over two million views on twitter. Several cast members of ‘The Office’ took to twitter to praise the show, such as Steve Carell, Ed Helms, John Krasinski, Angela Kinsey, and Brian Baumgartner.

Not gonna lie, got a little choked up watching this. Feeling the loves and the gratitudes. Thanks for the coolest shout ever, @LSUBands. GO TIGERS!!! https://t.co/SmjdSAfdJa

This. Is. Awesome. What school is this? Cause I think I need to go visit. https://t.co/1ypKgUvye2

In response, the conductors and drum major of Tigerband filmed a video invitation posted on the university’s social media inviting the cast of the hit sitcom to attend the October 20th game against Mississippi State, where this halftime show will be performed once more.

Angela Kinsey, who plays Angela Martin in the show, responded to the invitation hinting at her attendance, stating that she has family in Louisiana anyway. She then tweeted a follow-up response stating that she is actually from Lafayette.

Omg… I love this! Hmmm, I do have family there. https://t.co/UEQPNwuuP4

Though no other cast members have RSVPed just yet, given the popularity of The Office, the encore performance is sure to garner just as much attention to LSU as the first.