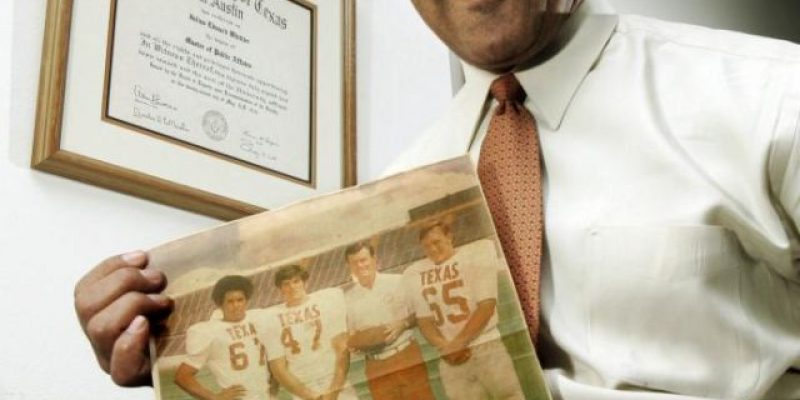 Julius Whittier was the Longhorns’ first African-American letterman. He played for the first time in 1970, one season after Texas fielded the last all-white national championship team in the history of college football. He was first a guard then switched to tight end as a senior in 1972– “a season in which he caught every touchdown pass the Longhorns threw,” the Associated Press (AP) reports.

The University of Texas (UT) announced that Whittier died on Sept. 25 at age 68. No cause of death was given, but Whittier had been battling Alzheimer’s disease. In 2014, his family sued the NCAA on behalf of college players who suffered brain injuries, according to the AP.

UT ended banning blacks from playing sports in 1963 but integration was a different story. At the time, NCAA banned freshmen from playing. Even though a few black players signed with the Longhorns over the next several years, none stayed long enough to make varsity.

Whittier, from San Antonio, wrote of his experience in 2007, explaining that his parents were afraid of what might happen to him in Austin. He said, “My dad was scared for me. He’d known some guys who struck off into ‘white’ territory and paid for it with their lives.”

When he attended UT, Whittier was one of 300 black students out of nearly 35,000. Whittier became a star freshman player, telling the San Antonio-Express News in early 1970 that his coaches treated him well but some of his teammates gave him some problems.

“Texas seems to recruit a lot of boys from small towns, and most of them have small minds just like their fathers,” he said. “They never think about the things that are happening in this country. You never hear them talk about Vietnam or racism. If you want to know the truth, the only people I’ve met that I can really talk to are the longhairs or hippies. They are really concerned about things like ecology and the war. I’m concerned about those things, too.”

Whittier played in the 1970 season opener against California. Texas won three Southwest Conference titles from 1970-72. The Longhorns were 28-5 during these two years, 20-1 in the SWC.

Whittier earned an undergraduate degree in philosophy and a law degree from Texas. He later became a criminal prosecutor in Dallas.

“Whittier’s success opened doors between Texas and black athletes,” the AP notes. “In 1971, Texas recruited the top player in the state in running back Roosevelt Leaks. By 1974, it had signed Earl Campbell, who would win the Heisman Trophy in 1977 and go on to a Hall of Fame career in the NFL.”

Interested in more news from Texas? We've got you covered! See More Texas News
Previous Article One of the best videos you’ll ever watch: being slapped by a seal with an octopus
Next Article One Billion Dollars In Grants Issued To Fight Opioid Crisis