Took less than 5 seconds on Google.

“Dr. Ford’s allegations should be investigated by the FBI. Full stop,” O’Rourke said. “There is precedent for that,” he said, referring to Anita Hill, who accused Justice Clarence Thomas of sexually harassing her when he was her boss at a federal agency. 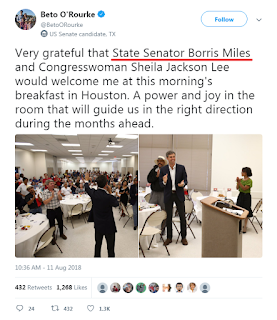 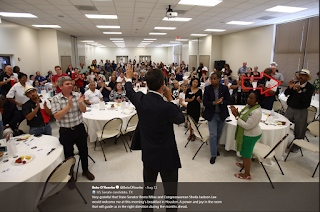 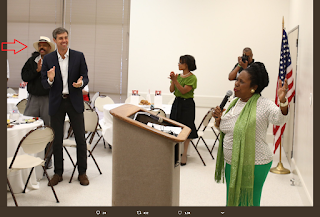 In other words: The guy going after Brett Kavanaugh over sexual misconduct allegations is doing campaign events with…BORRIS friggin’ MILES?!?

So who is Borris Miles? He’s this guy…

Miles is a state senator from District 13, which is in Houston, and as you’d imagine he’s a Democrat. Miles also is somebody who, when you’re palling around with him, you don’t get to puff yourself up about Brett Kavanaugh’s partisan accusers.

Why do we say this? Well, from his Wikipedia…

In April 2008, Miles was indicted on two counts of deadly conduct. The first charge came after Miles allegedly pulled a gun on a Texas Southern University regent and his wife during a Houston Rockets game. The second charge involved a man who pressed charges against Miles after Miles allegedly crashed a party at a hotel, forcibly kissed a woman, and threatened a local businessman while brandishing a weapon. Miles allegedly told the man “You don’t know what I’m capable of doing.” In a January 2009 trial, Miles was acquitted on both counts.[8][13]

But there’s a lot more going on than that. Last year the Daily Beast – no far-right propaganda organ, that – unleashed a scathing expose’ of Miles’ conduct at the Texas capitol…

Lauren*, a Texas legislative intern, was standing underneath the bright blue-and-red neon sign of The Continental Club, a famed Austin bar frequented by schmoozing politicians, lobbyists, and reporters.

That week in May 2013 was filled to the brim with end-of-session (“sine die”) parties, and Lauren was with a group of other interns on South Congress when Democratic state Rep. Borris Miles pulled up.

According to Lauren, Miles leaned out of the carriage he was riding in and pulled out a large roll of money. He handed “maybe $500” to an intern and then looked at Lauren.

“You know how you have the roll of hundreds that you see on TV? It was like that,” Lauren told The Daily Beast.

“I said, ‘Hi Representative, how are you?’ Then he slowly looked me up and down, counted out more money, reached out his hand and said, ‘Bitch, you want to fuck with me tonight?’

“I said ‘No, thank you’ and physically stepped back,” Lauren recalled. “I didn’t want to be rude to him. I remember his intern pacifying him and saying, ‘It’s time to go.’

“Everyone was just shocked that he said that—that he cussed at me and that he was offering me money. It was outrageous,” she continued. “I just remember thinking, ‘I need to go, and I need to not be here anymore.’”

Chris*, a Democratic state representative who asked not to be named out of fear for his personal safety, confirmed Lauren’s contemporaneous account of her story to The Daily Beast. (Chris is in the same party as Miles, represents a district geographically removed from Miles’ district, works in a different chamber, and has never run against him.)

“At some point that night, I got a call or text message from [Lauren],” he recalled. “She said Borris Miles was at The Continental Club and that he had propositioned her. I didn’t quite understand the whole scenario until later, but I knew that she was not comfortable and [she] was not good.”

Chris and his chief of staff told The Daily Beast that they received the call and then went to pick up Lauren from The Continental Club. In separate interviews, all three of them said they spent the rest of the night drinking together in a group.

Chris’ chief of staff said, “I remember we asked her whether she wanted us to do anything about it, but at the time she’d just said, ‘No, let’s get out of here. I’m not going to see him again.’”

Sarah*, who worked with Lauren in Chris’ office, told The Daily Beast that she was informed about the incident the following morning.

“I remember thinking at the time: Why would you say something like that to a young woman who is literally doing nothing to you?” Sarah said. “I was surprised that it was so open, like he did it in a public place. That kind of blew my mind, especially because he’s a lawmaker.

“It’s not a sexual innuendo or just a guy seeing if you’re up for something—it’s far beyond that,” Sarah continued. “In my opinion, he’s going out of his way to intimidate and victimize young women at the Capitol.”

There’s plenty more where that came from. You get the picture.

Beto O’Rourke can’t go slumming with scumbags like Borris Miles and then turn around and happily join in smearing Brett Kavanaugh. At least not if he’s to have any credibility.

On the other hand, O’Rourke isn’t any worse than the rest of today’s Democrat Party – in which uncorroborated, obvious lies might be told about one of the cleanest Supreme Court nominees ever presented, and those lies are in turn endorsed by the likes of Tom Carper, who has admitted beating his wife, and Sherrod Brown, whose abuse of his ex-wife was documented in court proceedings. Where are the expulsions of Carper and Brown, if Kavanaugh’s supposed high school fumblings are a disqualification for high office? What of Cory Booker, whose self-congratulatory column in the Stanford school paper years ago admitted to the unwanted groping of a high school girl?

Perhaps O’Rourke would fit right in among the Senate’s Democrat hypocrites and scoundrels. The question is whether he fits in with Texas’ voting majority, which woke this morning to news that O’Rourke’s opponent Ted Cruz was harassed and chased out of a tony Washington restaurant by a leftist mob screaming “We believe survivors!” last night. What about the survivors of Borris Miles, Booker, Carper and Brown?

And will America survive the antics of Beto O’Rourke and his party?

Interested in more news from Texas? We've got you covered! See More Texas News
Previous Article The Culture Of Competence, And The Culture Of Everything Else
Next Article Per Kennedy, Deborah Ramirez Won’t Testify About The Brett Kavanaugh “Porky’s” Caper