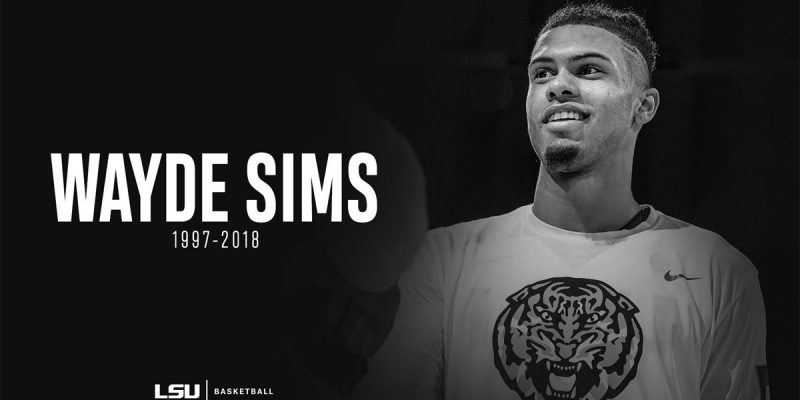 Absolutely awful news broke last night in Baton Rouge, as junior forward Wayde Sims of the LSU basketball team, a Baton Rouge native who prepped at University Lab School on campus, was gunned down in a fight just off the Southern University campus on the north side of town.

LSU basketball player Wayde Sims, 20, was killed in an early Friday shooting near Southern University, according to Baton Rouge police.

Detectives are investigating the homicide that happened in the 600 block of Harding Boulevard around 12:25 a.m. This is located across the street from Mumford Stadium and the tennis courts.

Police said Sims, a junior attending LSU with a forward position on the team, was transported to a local hospital with an apparent gunshot wound. Police said Sims died due to the injury.

A video has been circulating this morning that appears to show the moments before Sims was shot. In the video, a group of unidentified males appear to be in a scuffle and a gunshot can be heard near the end of the video.

So far there haven’t been any arrests made in the case, though it’s pretty likely the killer is going to be found soon.

Sims’ father Wayne played basketball at LSU as well. He was on some exciting Tiger teams and played with two of the most high-profile players in school history – Chris Jackson and Shaquille O’Neal. For the younger Sims to join the roster was a great piece of program tradition.

That’s all been cut short.

Milton Talbert, who said he worked for years with Sims’ father, Wayne, went out to the scene this morning after he heard the tragic news.

“I just had to come down and see this,” Talbert said. “It’s just so sad that all our young people are just destroying each other, for no reason. … I just feel for Wayne and his wife this morning.”

He said he planned to reach out to Wayne Sims to offer his condolences, and let him know that he knows the pain his friend is experiencing all too well.

“We had lost our son in 2004,” Talbert said. “He was murdered, him and his friend. … I know the feeling, when you lose a child like that, it’s devastating.

“Hopefully he can always look to the heavenly hills because that’s where all our strength comes from.“

“We are all devastated,” said LSU basketball coach Will Wade. “We need your prayers for Wayde, for his family, for all of us. We are heartbroken.”

There is a video circulating which captures Sims’ death. We won’t show it out of respect to his family, but what it depicts is a street fight where Sims is being set upon by four or five men and is nevertheless giving better than he’s getting – until a man pulls out a pistol and shoots him in the head. Sims falls instantly.

We could launch into a long dissertation about how the respect for human life is rapidly diminishing in large quarters of society, and we could especially launch into a screed about how North Baton Rouge is an utterly failed community which is now claiming a staggering body count. It’s clear that part of Louisiana’s capital city is overrun with violent morons unable to settle differences without resorting to barbarism, and it’s frightening that the building blocks necessary to save North Baton Rouge from itself appear to be lacking. Quite apparently there is no quality in the political class representing the area; just this week it came out that Metro Councilwoman Chauna Banks viciously attacked one of her colleagues with a reference to his son’s paralysis resulting from another episode of gun violence; that in response to a reference made about Banks’ ethical violations. It’s clear that incivility is the rule among the people crucial to any attempt to lift North Baton Rouge out of the muck.

But it isn’t getting better. Baton Rouge’s murder fever is only advancing. Now it’s claiming the lives of people who by no means should be murder victims. Wayde Sims wasn’t a ghetto kid; he came from a solid family and he had the best support structure available to a college kid in Louisiana as a member of the LSU basketball team. Sims wasn’t a choir boy; he’d had some disciplinary issues and last year Wade almost kicked him off the LSU team – but for his status as a legacy he probably would have been gone. Despite all that, every report we’d heard was that he’d turned his life around and was doing exceptionally well both in school and in basketball.

And yet there he was on a street near the Southern campus fighting with a bunch of thugs who killed him.

It’s senseless, it’s disgusting and it’s infuriating. At some point it has to be addressed – not with midnight basketball, or kind words, or promises to do better, or demands for more money. At some point it’s the moral rot which must be cleansed from the community and a determination by the people living there to do better – with family, with work, with staying off the streets in the middle of the night, with parenting, with obeying the law.

And if that commitment isn’t made, then the only alternative to watching an entire city waste away as Detroit, Baltimore, Jackson and others have is bulldozers. Because an area which has failed as North Baton Rouge is failing can’t be fixed without clearing it and redeveloping it into something else.

We’re nearing that point. It’s time to stop the petty politics and start making decisions. Maybe that’s the only good which can possibly come out of such an infuriating, ugly atrocity as the loss of Wayde Sims is.

Interested in more news from Louisiana? We've got you covered! See More Louisiana News
Previous Article Loyola University New Orleans fields most volleyball players in Louisiana
Next Article One of the best videos you’ll ever watch: being slapped by a seal with an octopus