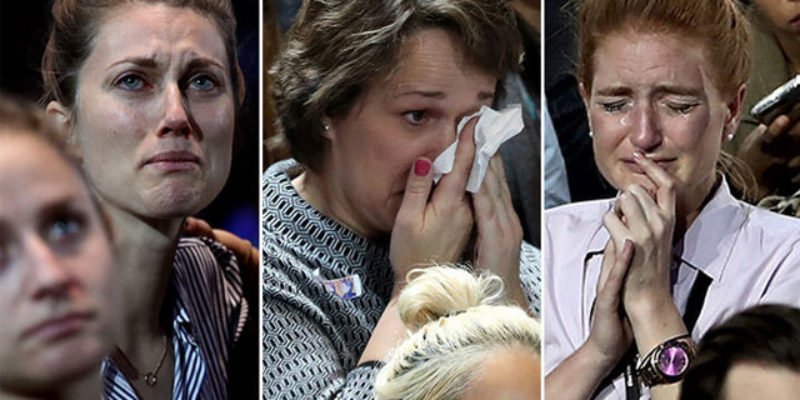 A new study surveyed students at Arizona State University. The researchers analyzed stress levels of the college students around the time of Trump’s inauguration in 2017. They came to the conclusion that a substantial portion of the students were not handling the situation well. According to the study, 25 percent of the students reported “clinically significant” levels of stress.

“A quarter of students found the 2016 election so traumatic they now report symptoms of PTSD,” Daily Mail reports. Remarkably, “some had stress scores on par with that of school shooting witnesses’ seven-month follow-ups.”

Experiencing a school shooting is no joking matter. That is a life or death situation, and understandably leaves a heavy emotional scar on those who have to live through such a tragedy. Many of these witnesses had dear friends die. Some even saw victims shot. All will forever have to live with the memory.

By the analysis of this study, their are students reporting stress levels on par with this kind of life threatening experience. Trump becoming president was so emotionally traumatizing that a quarter of college students “were so crestfallen their symptoms would be deemed a medical condition, severe enough to interfere with their work, social activities, and personal relationships,” Daily Mail reports.

It is important to remember that, at this point in time, Trump had not done anything as President. He had simply stepped into the oval office. Merely the idea of Trump being the leader of the nation gave these students PTSD symptoms. It thus remains curious to speculate how these same students have handled the two years he has spent in office. How will these students handle the midterms if the long hyped blue wave falls short?

College has long carried with it a very prestigious connotation. Ideas such as intellectual elite and mental strength have long dominated the perception of those selected to partake in the collegiate experience. These qualities, while once a given on the college campus, are evidently now growing scarce in supply.

Dr. Hagan, who conducted the survey, makes some helpful observations to try and better understand the phenomenon. “Most of the students in the study said they consumed their election coverage via social media,” Daily Mail reports. According to Dr. Hagan, “the social media factor cannot be ignored.”

She believes “the shock factor – Donald Trump’s win despite predictions of a Clinton sweep – took many Democrat voters by surprise,” according to Daily Mail.

As social media has become a hub for progressivism, it likely is difficult for democratic voters to gauge the existence of conservatives. This was worthy of note during the time of the survey in early 2017. Many additional measures have been taken since then to silence conservative voices on social media platforms, which has likely only increased the difficulty for progressives to understand the size of the other half of the country.

This dilemma for progressives looms large over the 2018 midterms. Within these social media bubbles, left leaning ideologies dominate and are seemingly all that exists. The inability to cope with a reality they don’t understand may produce additional PTSD symptoms for college students as more traumatic events transpire.