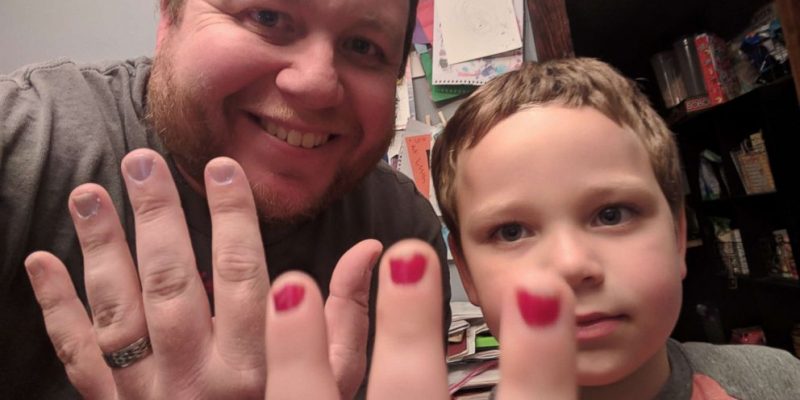 Sam Gouveia wore nail polish to kindergarten class and received feedback from his boy classmates. Being all of five years old, these children are not yet submerged in progressive teachings. The little boys probed him with questions like, “what are you doing?” and suggested that he should “take that off, you look stupid.” Children are not always the most eloquent with their disapproval. However, there is something to the idea that one is born with an innate knowledge of the world, and it takes a lot of work to distort a natural understanding of how things work.

Sam’s classmates, in the manner expected from unfiltered 5-year-old boys, were speaking out about a rather basic observation. Nail polish is something girls wear. The little boys were expressing an idea, in a raw and rudimentary fashion, that there exists a difference between boys and girls. However, their worldview has been deemed in need of correction.

This is my son, Sam. He’s 5. And today he learned how shitty and harmful #ToxicMasculinity is. My rage meter is spiking right now so excuse me if this is a little raw but there are some things I want to say about BS #gender norms (a thread) pic.twitter.com/NtoE2VHKsU

According to Sam’s dad, even 5 year old little boys can be agents of toxic masculinity. This suggestion seems to be attacking just the basic boy model then. This so-called “toxic masculinity” was not taught, but just an organic intuitive response. Boys then, by this analysis, are inherently broken, and are in need of adjustment.

It is ironic that Sam’s dad expressed outrage at gender norms as he posted a picture of his son doing something traditionally quite masculine. Perhaps the picture is telling of the dad’s subconscious insecurity of his son’s behavior. He may have on some level wanted to defend his son’s truly boyish nature. Fishing is predominantly a male activity, and the hidden message here might be interpreted as, “See! My son does boyish things too!” However, the dad suggests in his twitter message that his “rage meter is spiking” because of “BS gender norms.”

It is an understandable position to feel sorry for little Sam for having to face the criticism of his classmates. That surely was not a fun experience for a little boy so vulnerable to public opinion. However, it is crucial to note that the direct effect was that Sam told his dad after school that he wanted to take the nail polish off. This highlights the natural effects that cultural influence will have on an individual.

The feedback from one’s surroundings has a considerable impact on the way one is to act. If the feedback from his classmates was the final call for whether or not Sam would wear nail polish in the future, that would have been his last day to do so.

Yet, this is not where the cultural influence stopped. The influence of his classmates was overridden by progressivism. Whenever Sam’s dad took to twitter, the response he got from this social media outlet was overwhelmingly reinforcing support for boys wearing nail polish.

It was the response from strangers that gave Sam the courage to keep his nail polish on. His dad admits that after facing criticism at school, he wanted to take it off. It wasn’t until Sam’s dad read him some of the comments on his twitter feed that Sam decided to wear nail polish to school again.

Sam’s father was very pleased with the support they have received from the community. “Community members have also been great,” he said, “asking if they can give Sam free manicures and dropping off nail supplies.”