The numbers are in for third quarter economic growth. The U.S. economy grew 3.5 percent from July through September of this year. That marks the best Q3 since 2014, and a sustained momentum carried on from a robust 4.2 percent growth rate in Q2.

“The U.S. economy grew a robust 3.5 percent from July through September,” Fox Business reports. “The latest read is the best back-to-back quarterly growth since 2014.” 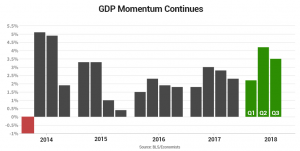 GDP growth has likely only begun. As businesses have benefited substantially from the major slash in the corporate tax rates, down to 21 percent from 35 percent, capital investment has only just begun. Many of these investments are still awaiting their returns, as expansion has not yet led to an increase in production for many unfinished projects.

While Q4 and Q1 are traditionally the slower quarters of the year for economic growth, there is reason to believe that will not be the case this time around. White House Council of Economic Advisors Chair Kevin Hassett “estimated that capital spending will remain around 10 percent,” Fox Business reports. Hassett’s estimates and analysis of the Trump economy have so far proven reliable.

“We’ve got a sustained capital spending boom, and that gives you growth, because what’s going to happen now is all those new factories are going to start producing output in Q4 and Q1 of next year,” Hassett said.

Yet, GDP growth has already well passed 3 percent. By Hassett’s analysis, it is quite likely that 3 percent growth may be the new low bar for a quarterly growth rate.

These numbers act as the last major window into the Trump economy before the midterms. Trump has even speculated that there may be more tax cuts on the way to add icing onto the cake.

Interested in more national news? We've got you covered! See More National News
Previous Article Highlights from the #WalkAway Rally [videos]
Next Article If You Haven’t Been Watching KPEL’s Series On The Permian Basin Oil Boom, You Should…