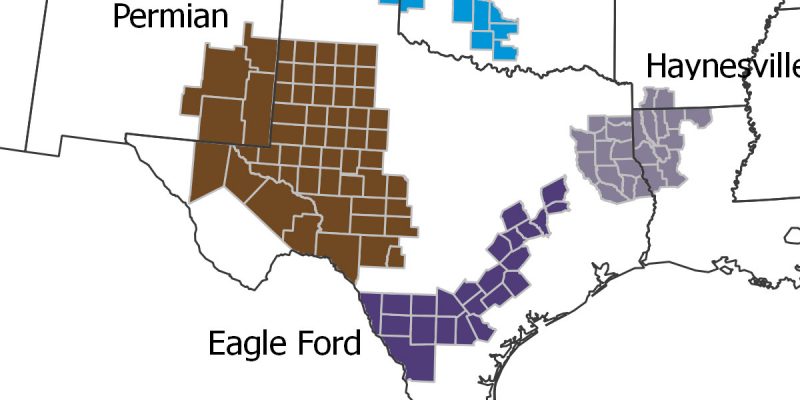 …particularly if you’re in Louisiana and particularly if you’re in Acadiana. KPEL, the talk radio station in Lafayette, sent reporter Rob Kirkpatrick to Midland, Texas, which seems to be the new home of the Acadiana oil and gas sector – it used to be Lafayette, and now it’s in Midland – to find out what life is like for the Cajuns who’ve relocated to West Texas and whether they’ll be coming back to offshore drilling in the Gulf of Mexico any time soon.

The answer, to the consternation of the folks in Lafayette, is the Permian Basin has more or less drunk our milkshake.

In the Permian Basin, which is a vast area covering much of West Texas and into New Mexico – earlier this year the Bureau of Land Management offered a lease sale in eastern New Mexico which netted the federal government a record $1.7 billion, so intense is the interest in oil drilling in the Permian – the play is so rich that almost by itself it’s driving America’s ascension to the status as the world’s largest oil producer. And while the usual pattern for oil booms is they’ll spike for a few years and then settle into something a bit more stable, the impression the Permian is giving off is a bit different. There is so much oil under the ground in the Permian that it could be decades before it isn’t a major player on the scene.

And the population of Midland, Texas is only going to continue to spiral upward.

The 2010 census pegged Midland’s population at 110,000. Current estimates have it at 155,000 – almost a 40 percent increase in less than a decade. That’s a boom economy which can begin feeding on itself as it continues. After all, the money made during the Gold Rush in California in the mid 19th century wasn’t made from gold – it was made in dry goods, in transportation, in lodging, in all the other sectors supporting the influx of those miners.

So far, KPEL has put together two reports which ran as Facebook videos. The first one offered a frank assessment of whether those Acadiana workers will be coming home for more than their time off – the answer being probably not any time soon…

And then Kirkpatrick found Louisiana native Ralph McIngvale, who’s running essentially a high-class trailer park which houses more than 4,000 oil and gas workers in relative comfort and building units as fast as he can to accomodate larger and larger demand. McIngvale’s opinion of the future back home, as somebody who’s been in the oil and gas business since the late 1970’s, isn’t the rosiest compared to what he sees in West Texas…

There are going to be more segments of Kirkpatrick’s reports to come. But what’s clear so far is the Texodus, the migration of Louisiana’s labor force to the boomtowns across the Sabine River, looks fairly permanent based on the vast difference in business and public-policy environment – not just the fact the Permian Basin is where the oil is. After all, there’s plenty of oil in Louisiana – just not a willingness to do what’s necessary to attract investment like there is in Texas.

Meanwhile, Louisiana is still trying to sue oil companies for wetlands erosion. If you think the industry on which our state’s economy is based is coming back in any great measure anytime soon, you’re probably deluding yourself unless a massive change is made to make Louisiana competitive.