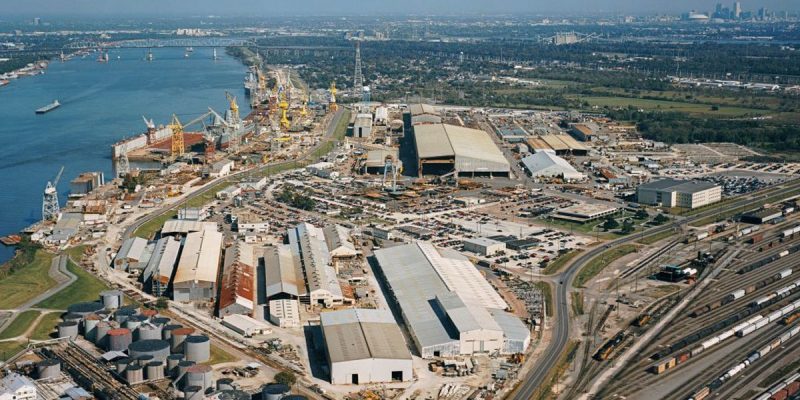 As announced in USA Today Louisiana now ranks as 2nd from the bottom on the Gallup-Sharecare Well Being Index, better known as the “Misery Index”. When added to all the other abysmal rankings that place us so far down the list of successful states it makes one wonder how our governor can possibly say that we are on the right track. But in a video news release say that he does. It leaves one to wonder what universe his PR people live in?

Now everyone knows that I am a firmly dedicated adherent to the philosophy of “It’s the economy stupid”. I am committed to the concept that all of the issues that cause us to be a “miserable” state are deeply rooted in a sick economy that fails to achieve a favorable return on all of the incredible assets that we possess.

With that being said this week we have seen a nascent illustration of what we could expect if we just were willing to change our ways. One of the great assets that we possess are our waterways and in particular the Mississippi River. The River is home to the largest port complex in the Western Hemisphere, running from the mouth of the River to Baton Rouge. It is an incredible asset that other states would do anything to have, but it’s ours!

Despite the value of this asset we have failed to fully convert its potential into boundless wealth-creating jobs. In order to understand this point let me pass on a brief history lesson.

As we all know New Orleans (and Louisiana) was founded because it was in the right place for a port to service the interior of the American Heartland. New Orleans prospered and grew for hundreds of years based off of the port; it grew to the point where it was home to many manufacturing and distribution facilities, as well as a huge number of international commerce-related business enterprises. Huge banks, brokerages, warehousing, legal and insurance businesses, and maritime support businesses; all contributed to an economy that spread throughout the state.

But starting about fifty years ago something happened. Marine commerce changed as did the attractiveness of New Orleans as a business hub. Direct employment in the port declined as containerization changed the way cargo moved. At the same time businesses closed or departed to states that were more business-friendly.

To use a colloquialism we were impacted by a “sea change” in our maritime economy but we refused to do anything about it. The port’s declining value in the overall economy was compounded by the departure of energy businesses to more business-friendly climates. The result of these events was that the economy of New Orleans and to a great extent Louisiana slipped into irrelevancy and its ability to create wealth through good jobs diminished.

Sometimes we get lucky. As we know one of the last major industries that departed our region was shipbuilding that took place at the Avondale Shipyard. Now after many years a company has purchased that site with the intention of making it into a maritime distribution/value-added manufacturing hub. Not that this will be easy. The site itself has limitations and there will be substantial capital needed to successfully put it back into commerce. However the potential is truly important. Actually with luck it will be big deal.

Ports offer a limited but important number of opportunities. First it goes without saying that general port operations and logistics create jobs. We currently have those jobs even though the number is diminished from fifty years ago.

These jobs are great but the potential offered by our port is far greater. A truly effective use of a port’s potential also includes distribution, manufacturing, and commercial activities, elements that we are weak in. The beauty of the Avondale deal is that it offers opportunities in distribution and manufacturing. As they say – two out of three ain’t bad!

I don’t know if Avondale Version 2 will be successful, I can only hope so. But if it does succeed it brings with it a key that we could use to unlock a rebirth of our maritime economy – no, make that our whole economy.

As I have expounded on for years that the way to take full advantage is to create a welcoming business climate as many other states have done. Eliminate the income tax, accept no failure in education, end the scourge of out-of-control litigation making us a legal hellhole, reduce government – we know the answers, we just ignore them.

Avondale can be a great start to a new economic future for Louisiana, a future that will rapidly end the misery that haunts our very rich state. We are fortunate to land this new opportunity and perhaps some years from now we can look back at the governor’s “right track” claim and remember that it marked a change in the way we view the economy and not just a way-point in the overwhelming growth of government.

Maybe we will be able to not so fondly remember the days when our state was not attractive to business and as a result our people suffered needlessly. Maybe……