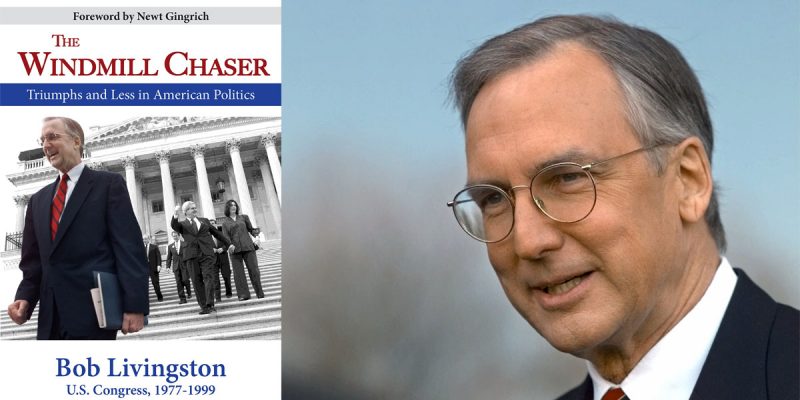 Livingston lost the first time in 1976 though due to proven allegations of election fraud the race was rerun the next year and Livingston became only the third Republican from Louisiana in the US House of Representatives in the 20th century.

After a disappointing third-place finish for governor in 1987 Livingston bided his time in Congress and benefitted from the historic GOP tidal wave that swept Republicans into majorities in both chambers.

A close ally of Speaker Newt Gingrich (who wrote the book’s Forward), Bob Livingston served as chairman of the influential Appropriations Committee.  After the combative Georgian opted to leave Congress after his party underperformed in the 1998 mid-terms, Livingston was poised to succeed Gingrich as speaker.

For a brief time it appeared that a Louisianan would finally hold the Speaker’s gavel as Livingston had secured the support of the Republican caucus and was designated speaker-elect.

And then the Metairie Republican pushed all of his chips in on a gambit to compel Bill Clinton to resign the presidency in the wake of the Monica Lewinsky scandal by leading through his own example and walking away from the apex of congressional power.

After leaving behind a two decade plus career elective politics, Livingston emerged as one of the most influential figures on Capitol Hill.

Livingston opened his tour with a book signing at Garden District Book Shop Friday evening, and he will also be appearing at the Louisiana Book Festival on Saturday, November 10th in downtown Baton Rouge.