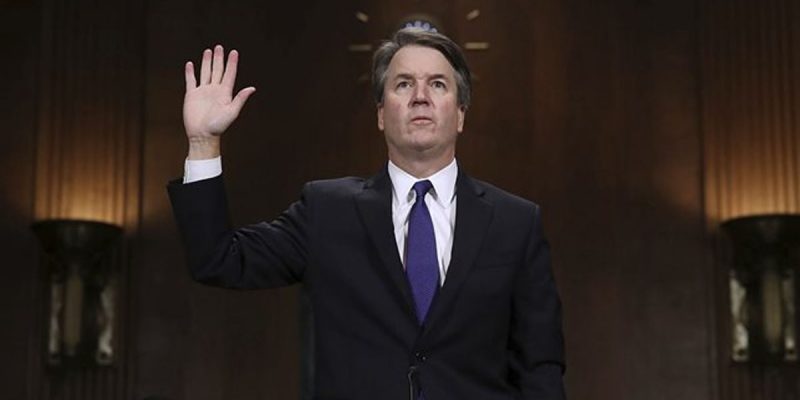 For weeks now the country has watched respected jurist Brett Kavanaugh have his name (if not his life and those of his family) torn to shreds with the dragging, hanging, and draw and quartering broadcast in real time and celebrated by the ostensibly apolitical daytime talk show spinsters and late night program jesters.

The analogies are medieval as was the treatment Democratic senators afforded Judge Brett Kavanaugh.

For twelve years, Judge Kavanaugh has served on the Appeals Court for the District of Columbia. He has undergone six, scratch that, now seven FBI investigations.

There was nary a complaint about the manner he had conducted himself in both the White House and the influential appeals court.

But that wouldn’t stop the unhinged opposition party from engaging in a scorched earth campaign to block his ascension to the US Supreme Court.

With impeccable academic credentials, a distinguished legal career, and a seemingly solid family life, the desperate party went for broke- they had to break the nominee or delay the process until a potentially more advantageous time.

First the senior member of the Senate Judiciary committee sat on an unsavory allegation that the folks in the Hoover Building did not know about despite those several background checks – and then sprung it out at the last second with multiple senators’ offices helping coordinate legal counsel and strategy for Kavanaugh accuser Professor Christine Blasey Ford.

While coming off sincere in her presentation, said sincerity was not supported with corroborating witnesses or evidence.

And Dr Ford seemed hazy on relevant details on the fresh public accusation of a  three decade old alleged incident.

Yet Dr. Ford almost drowned in the bouquets hurled at her seat from the Democrats on the dais.

The judge was not so well received.

And when it was Judge Kavanaugh’s turn, he wasn’t greeted with flattery and tributes but slanders and ludicrous questions about his high school and college days.

Then just as you’d think the Democrats had hit the ocean floor, they broke out the diamond drill bits. An undisturbed level in the Inferno was being discovered: high school yearbooks and underaged drinking.

So what Kavanaugh did as an adult – as a judge, young professional, father, and husband were irrelevant as to his qualifications when the Democrats and their wingmen in the media furiously searched disqualifiers to support their previously premature and unjust stated opposition.

Kavanaugh was put on a Torquemada-hosted episode of This Is Your Life, compelled to explain and interpret comments, doodles and notes from his personal calendars and high school yearbooks.

Even more humiliating the accused presumed guilty had to announce to the world how much beer he consumed as a teenager and when he lost his virginity at the crazed behest of the supposed guardians of sexual privacy.

How sadistic and unfair. How un-American of a process. How shameful that this sick spectacle happened at the very seat of our national government.

The Democrats signaled to their employers (not the people but the perpetual mob) that they’re willing to go as low as necessary to demonstrate their fealty to the progressive agenda.

For a party that has lionized a deceased caucus member responsible for the death of a young female campaign aide, you wonder how they keep a straight face while projecting their faux outrage.

And add in the one-time Klansman and another who regularly sexually assaulted women but received cover from his party and state government.

So what is the political statute of limitations where the Senate can’t ask?

Are we to deny someone a judgeship for having received a detention in middle school for telling an ethnic joke?

Will alcohol usage from one’s teen years be considered fair game (though not drug usage curiously)?

So if one can’t directly participate in the electoral process why should their alleged bad behavior be used against them thirty years later?

You can bet the Democrats have no intention of applying such coercive interrogatory measures on their own nominees.

Republicans will have to nominate wingless angels- though heaven forbid if said angels are religious.

In contrast, Democrats sent up will have the road plowed in advance, for any uncomfortable questions posed to their nominee will be declared racist, sexist, whateverist.

It’s what they do.

That a seat on the highest court is a lifetime appointment doesn’t in anyway justify the viciousness of this particular trip through the “advise & consent” gauntlet.

Nobody should be judged on their worst moments as a not fully developed adult, short of them being a murderer, drug dealer, or rapist.

There’s a good reason why the Democrats had to dig so deep; there was no there “there” when Kavanaugh was an adult.

Which is far more telling about the man, whose nomination to the highest court in the land, rests before the Senate.

Judge Kavanaugh had his “enough” moment.

The American voters will have their chance to do so in November.

Interested in more national news? We've got you covered! See More National News
Previous Article SCHMIDT: The “Duplication Of Benefits” Issue Has Been Resolved On Capitol Hill, And Flood Victims Can Celebrate
Next Article The September Jobs Report Shows We’re In An Undeniable Labor Shortage