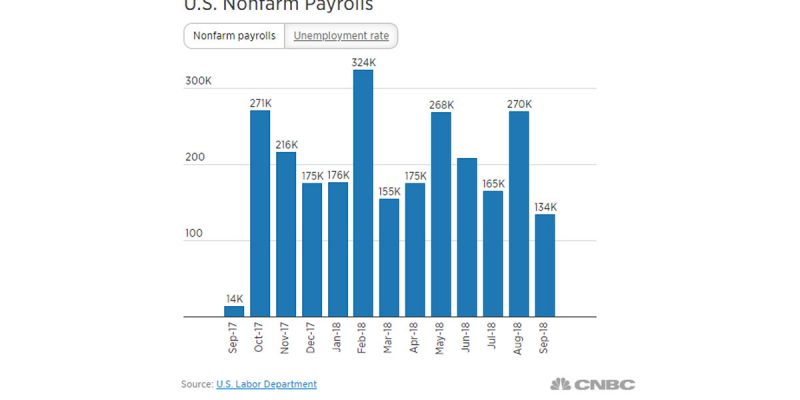 134,000 jobs added is a poor number, but that’s what the economy spat out in September – while generating a microscopic 3.7 percent unemployment rate.

Job creation for September fell to its lowest level in a year though the unemployment rate dropped to a point not seen in nearly 50 years, according to Labor Department figures released Friday.

Nonfarm payrolls rose just 134,000, well below Refinitiv estimates of 185,000 and the worst performance since last September, when a labor strike weighed on the numbers. The unemployment rate fell two-tenths of a percentage point to 3.7 percent, the lowest level since December 1969 and one-tenth of a percentage point below expectations.

Unemployment among black Americans declined three-tenths of a point to 6 percent, slightly above its record low of 5.9 percent achieved in May.

“The labor market is in excellent shape heading into the end of 2018, perhaps the best it has been in 50 years,” said Gus Faucher, chief economist at PNC. “Job growth was a bit softer in September, but some of that was from Hurricane Florence, and it should bounce back through the rest of 2018 and into 2019.”

Along with the September numbers, there was a major revision in the August jobs report – it’s now estimated that the economy added 270,000 jobs rather than the 201,000 originally posted. And in another revision, the current estimate for July is 165,000, up from 147,000.

So the economy is humming along very nicely. Why the lousy jobs number?

Yes, Florence did have something to do with that. But the main reason is that it takes two elements to create a job. First, it takes a business having a job opening. And second, a qualified applicant has to be identified to fill it.

And if you talk to people in human resources or to small business owners, what they’ll tell you is that it’s harder than ever to find people to fill their jobs, and because of that fact they’re in some cases growing more slowly than they’d like.

So we’re in a labor shortage. How do we get out of one?

Outside of having the economy slow down, which nobody wants, the answer is to increase the skills base of our workforce. And this is a problem, because the educational system is less adequate now than it’s been at any time in modern history. Our universities are cranking out snowflakes indoctrinated into leftist politics but lacking in soft job skills, our high schools are weak in teaching verbal and math skills, and there is a gaping shortage of people with trade skills.

And what’s going to happen as this labor shortage continues is you’ll see corporate America begin entering into the education and training field, giving up on traditional means of workforce development. That’s going to make for an interesting dynamic over the next several years.