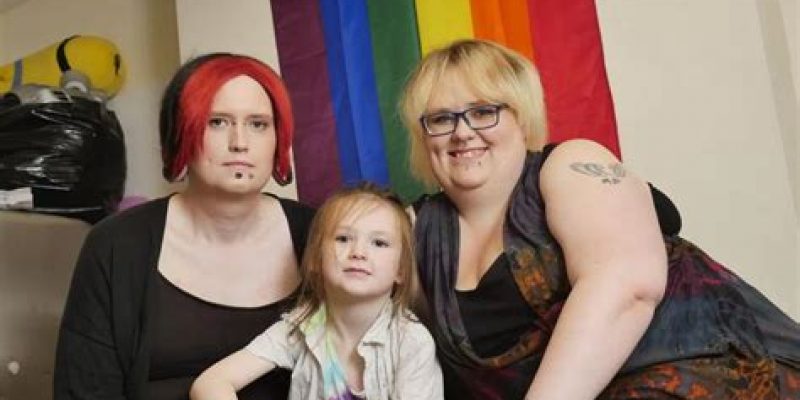 When parents aren’t parents, or moms or dads, this is what happens.

The first “gender-fluid family” in the U.K. is preparing for each parent to undergo gender reassignment surgery, the Daily Mail reports.

Louise and Nikki Draven, who are parents to five-year-old Star Cloud, are beginning surgeries to hopefully be in their ‘ideal bodies’ by the time their son is ten.Biological father Louise, 32 – who Star already calls mom – is planning to transform into a woman. His mother, Nikki, is planning to become a man and will be called Charlie.

Nikki said, “I was never happy about having periods or growing breasts. It felt all wrong. So I did some soul-searching and realised I’ve always wanted to be male.”

The Dravens married in a pagan ceremony in 2012 and are believed to be Britain’s first entirely gender fluid family. They said, “If we waited until Star was older, he’d spend his childhood with parents who felt incomplete.”

Star is being raised as gender neutral– his parents are calling him a person, not a boy.He is allowed to play with dolls and paint his nails at home. But, he’s confused and asking his mother, Nikki, questions, like why she wore a swimsuit at a pool and not shorts like other dads.  She replied that “she is going to a special doctor who will take away her ducky, which is Star’s word for penis.”

He’s also asking questions at school and coming home confused. His parents told the Mail, “Star is only in nursery but has already been put under pressure by other children. He came home the other day saying, ‘I can’t play with dolls – they’re for girls. We sat him down and explained that anyone can play with dolls and that it’s good practice for when he grows up and is a daddy. ‘He said, ‘I might not be a daddy – I might be a mammy!'”

The family has appeared on several TV shows and received a lot of criticism and support.It is a wonder child protective services has not intervened for child abuse by parents who are obviously mentally ill.