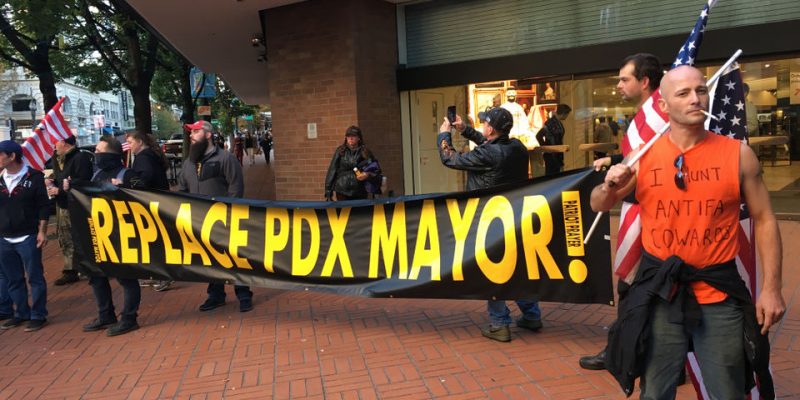 Saturday saw a clash in the streets of Portland, Oregon. Patriot Prayer and Proud Boys organized a protest, calling for law in order in the city of Portland. This was in response to an event where Antifa recently took to the streets obstructing traffic and beating on cars in the name of standing up against police brutality. Antifa showed up to the Patriot Prayer and Proud Boys event to counter protest, where Antifa lit an American Flag on fire.

Antifa cheered as their country’s flag went up in flames, symbolically depicted their aspired future for the nation. As the flames consumed the flag, a bold American from Patriot Prayer ran into the scene and saved his country’s flag from its fiery destruction. This one small fragment of the event may well portray a representation of the collective mindset of the two opposing forces at the protest, and what values the members fight for and defend.

The flag burning, as appalling of an act it may have been, was perhaps the most non-violent interaction between the two groups. The clash between Antifa and the defenders of the American flag eventually broke out into brawls on the streets where punches were thrown, pepper spray was used, and police intervention was necessary at times to break up the brawl.

Wild exchanges broke out and lasted for more than a minute long. The melee did not officially end until riot cops fired pepper balls to break up the brawl.

This marks but another physical clash of ideas that has spread throughout the country. Portland has played hosts to multiple such events. It is not unlikely that the city plays host to additional protests in the future, as political friction intensifies in the nation just three weeks out from the midterms in November.