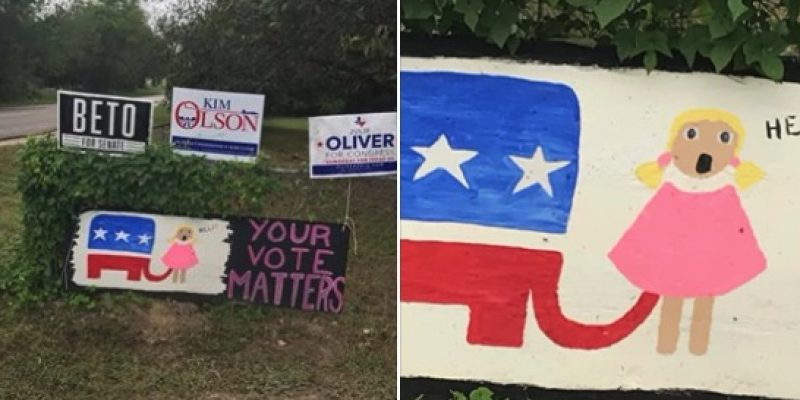 Marion Stanford put a sign in her yard in the small town of Hamilton, Texas, which depicts a red, white and blue GOP elephant with his trunk up the skirt of a little girl shouting “Help!” In pink paint it reads, “Your vote matters.”

To her, the local news reports, the sign symbolized the Senate’s confirmation of Judge Brett Kavanaugh to the Supreme Court.

People complained and the police department confiscated the sign on Oct. 2, the Dallas Morning News reported.

Despite the lies and perjury committed by Democrats and the women who falsely accused Kavanaugh, Democrats are continuing to post the propaganda on Facebook:

Too bad the republicans can’t stand to see what they’re doing to women in this country.

“Here we have a political party that is using women,” Stanford told the Morning News. “I thought the sign represented what is going on now and we can’t just stand quiet. I wanted to tell people we could stop it with voting.”

One of Stanford’s biggest critics was Texas Agriculture Commissioner Sid Miller, who posted photos of the sign, along with other political signs in Stanford’s yard, on his Facebook page.

“This is in Hamilton, Texas, and is supposed to be Judge Kavanaugh’s young daughter,” Miller wrote about the sign. “Notice my opponent’s sign in the background. The Democrat sleaze knows NO bounds!”

Stanford said the sign does not depict any specific person, even though it is supposed to represent the GOP and Kavanaugh.

She told the Morning News that the cartoon “was made last year by Washington Post cartoonist Ann Telnaes, a Pulitzer Prize winner.”

Telnaes drew the cartoon in December after President Donald Trump and the Republican National Committee endorsed Roy Moore, who was also proven to be falsely accused by multiple women of sexually assaulting them when they were minors.

People criticized Stanford for being a pedophile and posting pornography. Some people called for her arrest. Another commenter described the Hamilton Police Department “Nazi-like” arguing its officers don’t believe in free speech.

Stanford told the Washington Post that the Stanford police officer who came to her home told her, “It is pornography and you can’t display it.” He gave her three options: take down the sign, refuse to remove it and get arrested, or let him confiscate the sign. She chose the last option.

“It’s political season, and a citizen here placed a yard sign that featured a political animal taking an inappropriate position with a young child,” Kampfer told the Morning News. “A police member visited the owner’s home, and the owner asked the officer to take the sign.”

A Miller campaign spokesman reiterated Miller’s position that the girl in the image — which Stanford described as a “generic ladies room icon” — was meant to represent Kavanaugh’s daughter.

“It was vulgar and disgusting and had no place in someone’s yard,” Todd Smith told the Morning News.

Miller’s political opponent also criticized the sign: “Anyone who continues to share such an image that makes light of sexual assault is out of line and out of touch,” Olson said in a statement.

Interested in more news from Texas? We've got you covered! See More Texas News
Previous Article It Looks Like The GOP Is Out Of Danger In The Texas And Tennessee Senate Races
Next Article What Hurricane Michael Did To Mexico Beach, Florida Is Nothing Short Of Breathtaking