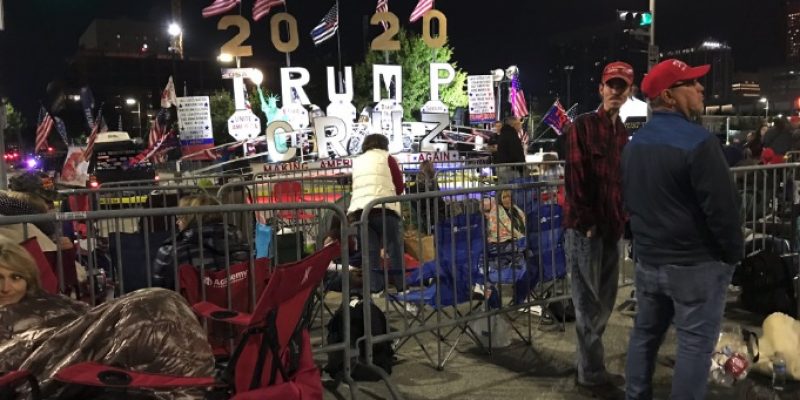 President Donald Trump will hold a rally for Sen. Ted Cruz tonight at the Toyota Center in downtown Houston on the first day of early voting.

More than 70,000 tickets have been requested. People began lining up last night for the huge event. Streets are closed and extra police are on duty.

Trump announced a “Big Texas Tailgater” that will start at 6:30 p.m. featuring foods trucks and live music courtesy of the Marcus Eldridge Band and the Will Carter bank.

“Texas is so big and so will be the turnout for our MAGA rally in Houston, Texas Monday,” said Michael Glassner, Chief Operating Officer of Donald J, Trump for President, Inc. “That’s why we’ve organized the Donald Trump – Big Texas Tailgater outside the Toyota Center. We’ll have great food, live music, big screens, and a great time for all of our guests. Inside and out, the excitement at this Trump rally will be as big as Texas – it’s going to be epic.”

The rally was moved from the 8,000-seat NRG Arena to the 18,000-seat Toyota Center. The line of people was weaving up and down near the Toyota Center before it eventually spilled over into Discovery Green nearby, KHOUS News reports:

Thousands of people are camping out outside Toyota Center to see @realDonaldTrump. He’s coming to Houston to support @tedcruz tonight. #HTownRush #KHOU11 pic.twitter.com/HU4PjYDJlq

It’s a sea of @realDonaldTrump and @tedcruz supporters. The line is now spilling into Discovery Green, blocks away from Toyota Center. This is 7+ hours before the rally. #KHOU11 pic.twitter.com/GrL7mbJRlg

So many people showed up to camp out, Houston police and the Trump campaign had to adapt their plans at the last minute. Police closed streets hours earlier than planned Sunday night.

Trump campaign organized what they’re calling a “Big Texas Tailgate.” People can buy food from food trucks and watch bands perform and the rally on big screens outside if they can’t get inside.

About 3,000 people are already lined up for the MAGA rally in Houston. #HTownRush #KHOU11 pic.twitter.com/BgwRIYDlrh

Interested in more news from Texas? We've got you covered! See More Texas News
Previous Article INVASION: Thousands of Illegals [with iPhones] cross into Mexico trying to get to U.S. Mexican police do nothing [videos]
Next Article Hilarious: all of the Fauxahontas memes