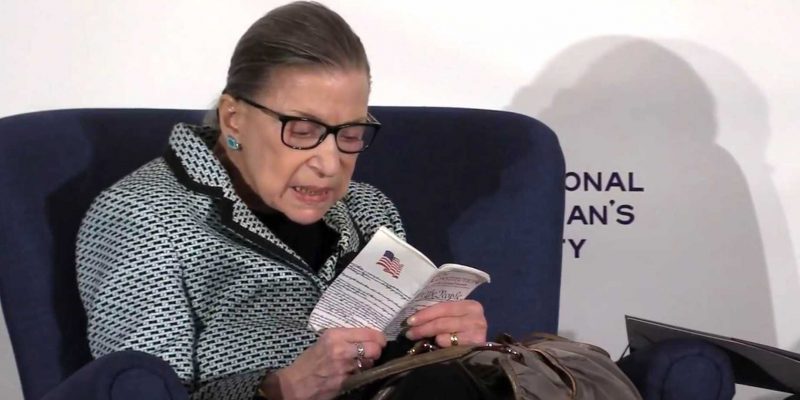 Another likely replacement by Trump on the Supreme Court will be Ruth Bader Ginsburg who most recently revealed that she does not know what the 14th Amendment says.

Supreme Court Justice Ruth Bader Ginsburg forgot the contents of the 14th Amendment while speaking to the National Woman’s Party. An member of the audience gave her a copy of the U.S. Constitution to remind her what it was.

The incident happened on August 26, 2018, when Ginsburg was asked to talk about the Equal Rights Amendment while addressing the audience at the Belmont-Paul Women’s Equality National Monument.

“So you’ve written a few articles over the years about the need for the ERA … and you’ve of course noted that the ERA would give the Supreme Court a more secure handle in its support for equality,” said Jill C. Morrison, Executive Director of the Women’s Law and Public Policy Fellowship at Georgetown Law.

“But as you mentioned, as both a litigator and in your time on the court, you’ve actually built precedent in that area,” Morrison continued. “So could you explain why you believe that the ERA is still as needed today as it ever was?”

Ginsburg, 85, began fumbling for her purse — which an aide then brought to her — as she then searched for a copy of the Constitution that she supposedly carries with her—which she couldn’t find.

While speaking to the National Woman's Party on 08/26/18, an audience member had to give Supreme Court Justice Ruth Bader Ginsburg a copy of the Constitution because she lost hers and couldn't remember what the 14th Amendment said.

Ted Cruz memorized the Constitution as a teen. pic.twitter.com/CCD9J2kLQR