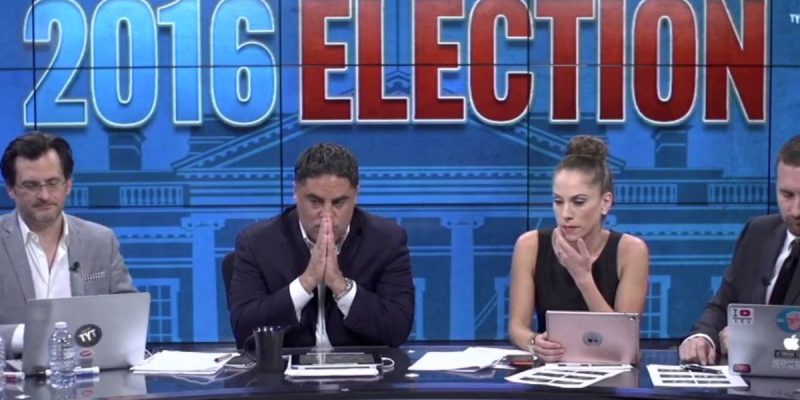 If you are ever feeling unhappy and need a lift in spirits, a great idea is to go back and watch the online videos showing the liberal media literally crying after the election of Donald Trump as President in 2016. Their reactions are hysterical as the so-called experts in the media were totally dumbfounded that Trump was elected.

In the weeks before the 2016 election, network news anchors and reporters were convinced that Hillary Clinton would win. They were confidently predicting that Trump could do nothing to change the outcome of the election. In fact, in the early part of the Election Night coverage, there was celebration and eager anticipation of a Hillary Clinton victory speech.

Thankfully, the revelry ended as the results started to come in from the Rust Belt and other states across the nation. In the end, Trump won an overwhelming Electoral College landslide by claiming victory in 30 states and securing 304 votes.

Ever since that remarkable victory, Democrats and their partners in the news media have tried every trick imaginable to thwart the President’s agenda. It is an attack against not only the President, but also his 63 million voters, the group unfairly labeled “The Deplorables.”

After his stunning victory, this President did not receive one day of a honeymoon from the media, which gave Barack Obama an eight-year vacation from tough questions and investigative journalism. In recent months, the media focus has been on the mid-term elections and their hope for a “blue wave” of Democrats taking control of Congress. Many hopelessly liberal members of the media want Democrats to investigate, impeach and ultimately remove President Trump from office.

Democrats and their special interest donors have raised a shocking amount of money to oust Republicans from control of the U.S. Congress. Overall $5.2 billion will be spent in this election cycle, including almost $1 billion by Democrats to win back control of the House. This will be 33% more than Republicans will have to spend to retain control.

Most political analysts believe the Democrats have a “lock” on the House and an outside chance of taking control of the Senate. However, it will be delightful if there is no “blue wave” of new liberal Democrats elected on Tuesday night and all the supposed experts are wrong once again. This outcome will lead to another wonderful result for the multiple Trump haters that litter network news coverage will be miserable once again.

Such a victory will not be easy for the GOP. It is already challenging enough for Republicans to win elections today. They face an onslaught of unfair media coverage and an array of special interests working on behalf of the Democrats. It is even more problematic when the top party leader, House Speaker Paul Ryan (R-WI), is regularly critical of President Trump. The latest controversy involves the question of birthright citizenship. Currently, American citizenship is granted to children of illegal aliens who are born in this country. In an interview this week, the President vowed to end the practice through executive order.

Not surprisingly, the plan was criticized by an array of Democrats and talking heads in the media; however, it was also denounced by Speaker Ryan, who said Trump “obviously cannot do that.” Ryan compared Trump to former President Barack Obama “who tried changing immigration laws via executive action.” Ryan claimed that “as conservatives, we believe in the Constitution.”

The criticism of Trump is nothing new for Ryan, as he has been doing it since Trump announced his presidential campaign in 2015. Ryan also knows he will garner sympathetic media coverage for attacking the President’s comments or policies. Ryan has condemned President Trump’s positions on Russian collusion, the travel ban, trade, and a variety of other issues. He enjoys taking the moral high ground and implying President Trump is either sexist or racist. In this case, he is fostering an image of standing for the “Constitution” while the seemingly racist Trump is targeting hard working illegal immigrant families.

Thus, a daunting task is made even more difficult by the horrible GOP congressional leadership. Nevertheless, we must encourage every voter to support Republican candidates in the mid-term elections as the nation cannot afford to empower bitter Democrats who practice Trump hatred coupled with dangerous socialist policies. Even though congressional Republican leaders like Ryan have been critical of the President, weak on immigration and other issues and have a lackluster record of achievement, compared to Nancy Pelosi and her Democratic Party cohorts, they are the reincarnation of the Founding Fathers.

In this election, the stakes are too high for our country. If Democrats take control of Congress, they will end the Trump agenda and launch a series of new investigations targeting the President once again.

The President is on the road to making America great again. However, if he is going to accomplish this goal, it is essential that the America people make the media miserable again on Tuesday night.