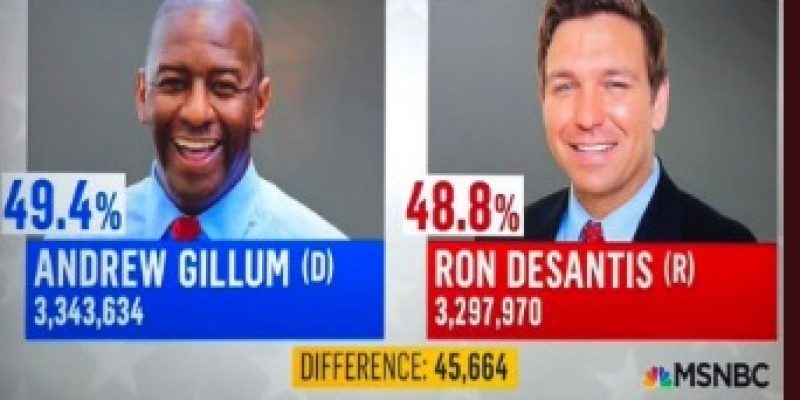 MSNBC “accidentally” posted prepared false election results from the governor’s race showing 99% of precincts reporting when the polls had only just opened.  The graphic shows Soros-funded socialist Andrew Gillum winning Florida when there were another at least 10 hours until polls closed.

“Quick clarification here,” a rather embarrassed All In host Chris Hayes told viewers. “Just want to say, earlier this hour, uh, we showed a graphic of the Florida gubernatorial race. May have caught your eye because our system had inadvertently populated some test numbers. Obviously, we do not yet have any vote totals here, the night before the election. That was a misfire. Don’t worry. I was pretty confused when I saw it up there, to see it myself.”

MSNBC accidentally shows false results of Tomorrow’s election that has not happened in Florida showing socialist Gillum in slight lead against ⁦@RonDeSantisFL⁩. Wishful thinking? What do you think https://t.co/IHaTFIAYEq

MSNBC had Gillum leading the Republican Ron DeSantis by six-tenths of a percentage point with 99 percent of the ballots counted when the polls had only just opened.