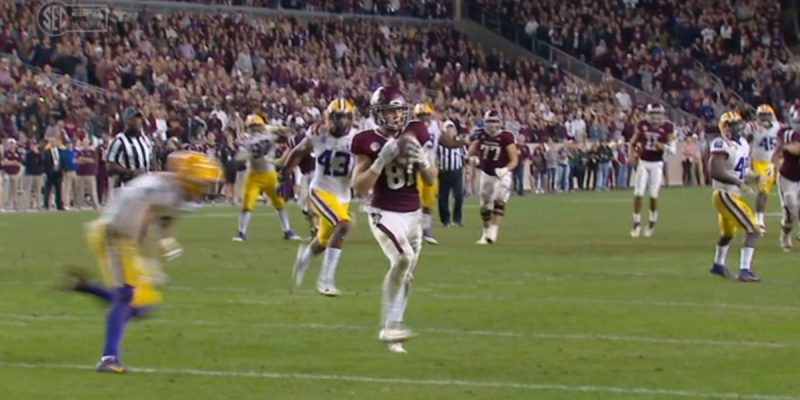 The Southeastern Conference, or SEC, flexed on LSU with a number of absurd calls, stealing an eighth straight win over Texas A&M and costing a likely Sugar Bowl berth for the Tigers. It may sound like a melt conspiracy, but the evidence was broadcast for all to see.

LSU’s coaching staff did a poor job with the game. That’s another topic that more knowledgeable football writers, or The Rant, can dice up. LSU played well enough to beat Texas A&M, but they could not overcome the SEC referees.

The major calls were…

1) overturning Grant Delpit’s interception on A&M’s last possession in the 4th quarter without having indisputable evidence QB Kellen Mond’s knee was down while he had control of the ball,

1b) plus it had another consequence on the game ending since the refs missed this in live action, it ruined the game flow that would have almost assuredly run off more than the 10 seconds the refs removed;

2) Mond spiked the football although a 2013 rule disallows spikes with 3 seconds left,

2b) A&M’s offense was not set for at least a second when he spiked, and

2c) aTm had 6 men in the backfield when Mond spiked it; and

3) A&M Tight End Jace Sternberger caught the ball in the first overtime, took two steps and fumbled which LSU recovered, yet the refs ruled it an incomplete pass and a turnover that would have ended the game wasn’t officially reviewed.

4) And for the coup de grace, there was an unfathomable pass interference call on Greedy Williams in the end zone as Texas A&M attempted a two-point conversion for the final score. The pass was clearly uncatchable and out of bounds, and a good call would have sent the game to an 8th overtime. Instead, A&M got another chance and won the game.

The fix was in. Calls ignored, calls overturned, calls missed and they can sit back and let rival SEC fans point out it’s just LSU fans crying about the refs. Except the refs were so egregious that even Aggies and Alabama fans couldn’t ignore it.

The SEC bias is very real. Football fans think it, but don’t know if they truly believe it. It’s quite similar to the American news media’s bias. It existed, people recognized it, and accepted it. Then Donald Trump labeled it Fake News and awoke Americans. It needs to be fully understood that the SEC office in Birmingham influences games at its discretion. The SEC referees should have been given the game ball from Jimbo Fisher.

The SEC is closing the gap between professional wrestling and college football. While this assertion may seem far fetched, LSU fans publicly called out the SEC officials for two weeks for the erroneous Devin White targeting call. Nearly every broadcast leading up to LSU-Alabama on November 3rd included mention of this. Billboards went up in Birmingham, planes trailed banners over ESPN’s Gameday, it was in their faces and for all to see.

Keep in mind, the SEC office never said the officials made the correct call with Devin White, just “By rule, all targeting calls are reviewed. The call was reviewed and confirmed.” This also led to the exposure of other key defensive players getting suspended for targeting—Texas A&M, Tennessee, and Missouri—either the game before or during the the first half against Alabama.

It’s being noticed, however with ESPN in bed with the SEC for the SEC Network, it isn’t being covered in the mainstream very well. And certainly not challenged or exposed by sports reporters.

When LSU had a Sugar Bowl game hanging in the balance, SEC referees ripped a win from the Tigers twice without valid explanation. This is bad for college football. It’s #SECfake. (Some clever person can come up with a catchy hashtag to embarrass Birmingham.)

Ed Orgeron May have been covered in Gatorade, but SEC Commissioner Greg Sankey and SEC Official Matt Austin are the ones who needed a shower after that dirty game.