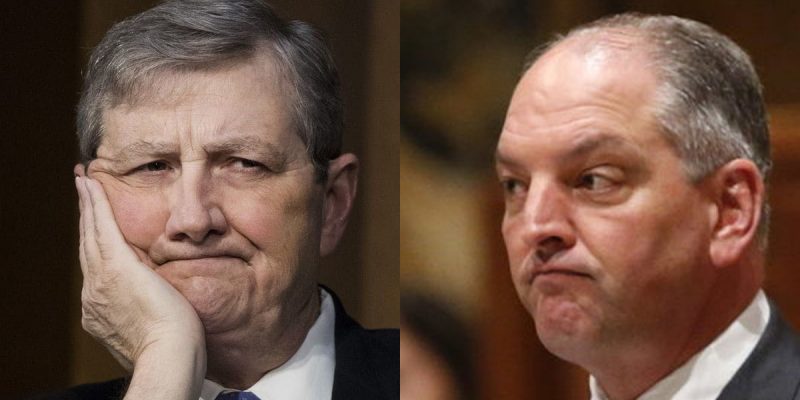 …for a John Kennedy-John Bel Edwards showdown. Two of the major suspected candidates in the potential 2019 field, Louisiana Attorney General Jeff Landry and U.S. Rep. Steve Scalise, both more or less officially removed themselves from the action Wednesday.

Louisiana Attorney General Jeff Landry said Wednesday that he won’t challenge Gov. John Bel Edwards in next year’s governor’s race, choosing instead to run for re-election as the state’s chief legal officer after significantly raising the profile of the job.

The Republican attorney general ended speculation about his 2019 election plans in an interview with The Associated Press, saying he’ll seek a second term in his current role and removing his name from the list of possible GOP contenders against the Democratic governor.

“There’s just so much more that I would like to do. And I feel like the staff, I owe them and the people of Louisiana an opportunity to finish the job,” Landry said in a phone interview. He added: “It was a tough, tough decision. I am very comfortable right now that I can best serve the people of the state as attorney general.”

Landry didn’t say which Republican he’ll support against Edwards. He said he decided to run again for attorney general because of the position’s importance in the state. During his tenure, Landry said, the office has worked to combat Medicaid fraud, target opioid abuse, advocate for crime victims and protect consumers.

“Another four years gives us another opportunity to really cement the Department of Justice’s reputation and perception with the average citizen, just bringing it to a whole new level,” Landry said. “I think over the last three years a lot more people know what the attorney general does.”

Back home, Landry’s strengthened his position as one of the main standard-bearers for Republican Party politics in Louisiana, by taking leadership of a PAC started by former U.S. Sen. David Vitter that is aimed at electing more GOP conservatives to state legislative offices.

It’s likely the Democrats will run someone against Landry, seeing as he’s been a colossal thorn in Edwards’ side over the past three years and generating a decently-funded opponent to occupy his time and treasure would be one way for Edwards to fire back at him. If he ran unopposed, or mostly so, Landry would be free to wander all over the state stumping for favored candidates and taking pot-shots at the governor.

That PAC, by the way, would be the Louisiana Committee for a Republican Majority, which under Landry’s direction has been renamed to the Louisiana Committee for a Conservative Majority. He’s been raising a significant amount of money for it to become, at least in some House and Senate races, a decisive factor in moving the state legislature in a conservative direction.

If Landry is successful with LCCM, and in a future post we’ll discuss the opportunities the 2019 election offers to conservatives to make the legislature, and particularly the Senate, a markedly different place than what it’s been over the years, he might actually be a more consequential figure in the 2019 elections than will the Republican gubernatorial candidate.

And that candidate does not appear to be Scalise, who was unanimously re-elected as the Republican House Whip – though for the next two years at least Scalise will do that job on the minority side. From a press release out of Scalise’s office…

House Majority Whip Steve Scalise (R-La.) was today selected to serve as the Republican Whip for the 116th Congress. After running unopposed for this position, he was unanimously voted in by his Republican colleagues.

“I am honored that my colleagues have chosen me to be their Republican Whip for the 116th Congress. While the midterm election results were not what we hoped for, we must now sharpen our focus on reestablishing the conservative principles that are proven to help hard-working families have better opportunities to achieve the American Dream.

“As Majority Whip, I worked hard to bring our Conference together and build coalitions that advanced our pro-growth agenda, and I will bring that same fighting spirit and determination to this new role. Starting today, we must stand united every day as House Republicans to build a more safe and secure America, as we work to block a radical, leftist agenda that would reverse the gains we’ve made for hard-working families across America.

“I look forward to keep leading that charge along with President Trump and the rest of our House Leadership team.”

You would think, given that Kennedy has set a deadline of Dec. 1 for making a decision whether to run for governor in 2019, that if Scalise were interested in the job he would have let someone else take the Minority Whip job. That’s a position somewhat akin to that of Maytag repairman – it’s not that difficult to rally Republicans to vote against Democrat bills brought to the floor by Nancy Pelosi. The only reason for Scalise to keep the job would be if he had every intention of sticking around past 2020, when most Republicans think they’ll be retaking the House majority. If Scalise was thinking about running for governor that wouldn’t be his focus.

So with that, coupled with other rumblings out of his camp we’ve heard, we’re pretty confident he’s out.

And that would mean Kennedy all but has the field cleared for the announcement he’s jumping in. That could happen any day, and likely before Thanksgiving if he wants to make a major splash and not have the news washed out by the holidays. There is of course conservative industrial contractor Eddie Rispone, who has already announced he’s running, as a potential dark horse in the race. We’ll see over the next few months if Rispone can make headway on the fundraising circuit and with respect to building political alliances – but his fight will become a very uphill one when Kennedy gets in as the presumed main challenger to Edwards.

But what we can say now, though the field isn’t quite formed at the top of the ballot, is that the 2019 election cycle in Louisiana is now underway.