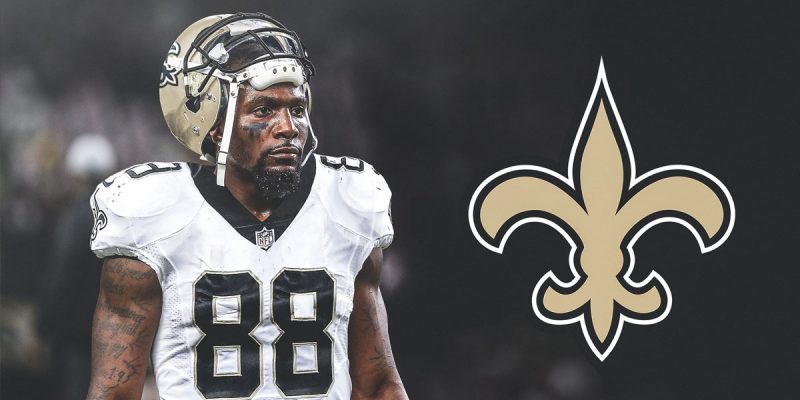 …because the prospect of Bryant catching passes from Drew Brees is probably the most fun piece of news we’ve had in Louisiana this week.

In case you missed it, the signing of the former Dallas Cowboys star receiver was announced in the media yesterday.

Dez Bryant is back in the NFL, and he is joining one of the league’s top Super Bowl contenders. The former Dallas Cowboys receiver agreed to a one-year deal with the New Orleans Saints, the team announced. Bryant’s salary was not immediately known.

Sources told Schefter that Bryant, who will sign the deal Thursday, is comfortable proving what he can do for a contending team this season before becoming a free agent again.

Although the Saints (7-1) have a seven-game win streak and are the No. 2 scoring team in the NFL, they are thin on proven receivers. Veteran Ted Ginn Jr. was placed on injured reserve last month with a knee injury, and Cameron Meredith hasn’t panned out as hoped since joining the team as a restricted free agent, with zero targets over the past three games.

Pro Bowler Michael Thomas is the only Saints receiver with more than 12 catches this season.

Not only hasn’t Meredith panned out, he was placed on injured reserve this morning. He still isn’t back from the knee injury which knocked him out of action all last year and it’s starting to look like he won’t ever be. So with Ginn out, and no prospect of Meredith being able to step up as a receiving option, and rookie wideout Tre’Quan Smith, who’s going to be very good before he’s done, really better suited to a role as a third receiver at this stage of his career, there was a gaping void for the Saints to fill for a target behind Thomas.

After all, as the New Orleans Times-Picayune noted earlier today, while Thomas has posted an amazing 70 catches in eight games so far this year, the wide receivers behind him in the Saints’ rotation have contributed a mere 21.9 percent of the team’s passing yardage, which is the lowest number in the league.

Obviously that’s not the end of the world, because the Saints have Alvin Kamara out of the backfield and Kamara is more of a weapon in the passing game than most NFL teams have at wide receiver. And Ben Watson at tight end is also a quality receiving target.

But with Ginn on injured reserve what the Saints don’t really have is that deep threat who can take the top off a defense. Thomas can certainly beat a defense deep, as he proves all the time, and Smith will be a quality deep threat soon, but with the burden already on Thomas and the value in Watson and Kamara mostly coming in the short passing game, there’s a hole Sean Payton needed to fill.

Particularly as a slot receiver, though Kamara can always line up in the slot with Mark Ingram in the backfield.

Bryant, an eight-year veteran in the NFL, is just 30 years old. He’s had some foot and knee problems, but one assumes he’s healthy now given that the Saints worked out both him and former New York Jet and Denver Bronco Brandon Marshall before making the acquisition. He was let go in Dallas at the beginning of this season mostly because of what’s been described as a “fiery” personality and some of the distractions that have resulted from it, and also because Bryant’s production has tailed off since a stellar 88-catch, 1320-yard (15.0 yard average), 16 touchdown season in 2014. Since then his stats have declined – just 31 catches for 401 yards and three touchdowns in nine games in an injury-plagued 2015 season, 50 for 796 and eight touchdowns in 13 games in 2016, and a bit-better 69 for 838 and six scores last year.

The question is whether Bryant can provide a deep threat, though. Before the dropoff of the last three seasons he was pretty well known for his ability to stretch a defense. But last year, he only had eight catches of more than 20 yards out of his 69 receptions, down from 10 in 50 receptions in 2016. In 2014, the pinnacle of his career, Bryant had 22 catches of 20 yards or more out of his 88.

But here’s the thing – the Saints’ passing game is just a whole lot better than Dallas’ is. And Payton and Brees have been making receivers look a whole lot better than they actually are for quite some time now. Other than Brandin Cooks, who’s been very good with both the Patriots and the Rams since leaving New Orleans, there are a host of receivers who have largely disappeared since leaving the bosom of the Saints’ passing game. Kenny Stills, Lance Moore, Willie Snead…heck, even Jimmy Graham’s stock has dropped off rather precipitously since leaving. That might suggest if ever there was a place where Bryant might find a happy home and rekindle what was not too long ago a stellar career as one of the league’s best wide receivers, it’s New Orleans.

Not to mention that with Thomas on the other side of the formation Bryant can’t be double-teamed. In Dallas the last couple of years he’s been in the lineup with Terrance Williams and Cole Beasley at wide receiver, neither of whom scares anyone.

It’s a bit of a risk introducing Bryant into the Saints’ locker room, but the payoff is huge. If Bryant is healthy and picks up the offense quickly, he could make a Saints offense which just lit up the undefeated Los Angeles Rams for 45 points on Sunday all that much better.

And maybe even make the Saints truly ready for a run at that Super Bowl trophy the fans have been hungry for since the franchise won its first back in 2010.