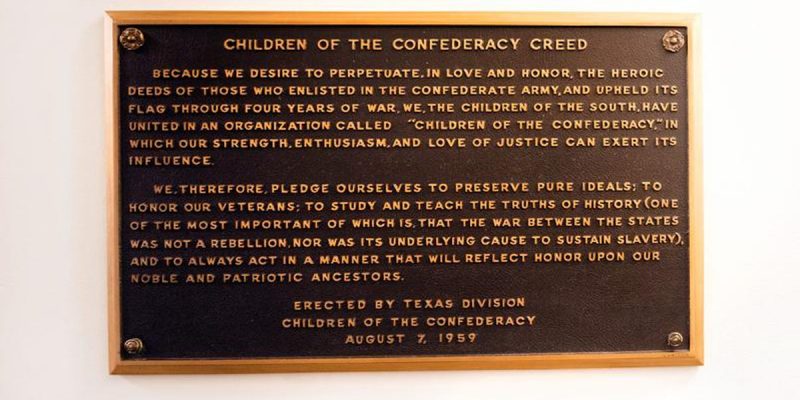 A 59-year-old plaque in the Texas State Capital building has received new attention recently by those who believe it should be taken down for its “offensive words and its false statements” regarding the cause of the South’s succession which led to the Civil War. The problem, however, is they are completely missing the point. The plaque is titled, “Children of the Confederate Creed,” and it goes like this:

“Because we desire to perpetuate, in love and honor, the heroic deeds of those who enlisted in the Confederate Army, and upheld its flag through four years of war, we, the children of the south, have united in an organization called ‘Children of the Confederacy’, in which our strength, enthusiasm, and love of justice can exert its influence.

“We, therefore, pledge ourselves to preserve pure ideals; to honor our veterans; to study and teach the truths of history (one of the most important of which is, that the war between the states was not a rebellion, nor was its underlying cause to sustain slavery), and to always act in a manner that will reflect honor upon our noble and patriotic ancestors.”

The main complaint about the plaque’s content is mainly the two statements made in the parentheses of the second paragraph: (1) that the seceding southern states were not rebels but using their sovereignty as independent states to leave a federal government which they believed to be encroaching their constitutional power and (2) that the issue of slavery was not the primary reason for secession, but only an example of the federal government’s growing power against the states.  These two statements are regarded by this mob of history censors to be utterly false and believe full-heartedly that everyone must surely agree with them.

Once again the history-censoring brigade has sharpened their pitchforks and lighted their torches for a new witch to burn. And nothing seems to stop them, not even key Republicans in the state government (such as Governor Greg Abbott and Speaker Joe Straus of the Texas State House, the latter being one of those who call for the plaque’s removal), when these Republicans should be standing up to the mob in the name of our history. In this case, the actual history of the matter is more complicated than many on the Left make it out to be, and they must be either blatantly lying about it or do not possess the ability to think out of their Marxist-box for a moment.

To fully understand the several motivations behind the south’s secession, you must consider some factors that affect the motivations of the time, which as history goes, one must do to fully understand it. Failing to do so provides us with the wrong conclusions and ultimately a false idea of history.

So, why would the Children of the Confederacy believe the Civil War to not be a rebellion but a “war between the states?” Perhaps because in the eyes of the South, it was a conflict between the northern states against the southern states and so they acted as if they possessed legitimacy to secede as a result. As new territories joined the United States of America, the divide between the North and the South grew as these new states ultimately joined the North. The southern states were outnumbered in votes and representation and decided, much like their revolutionary fathers before them, that the government had overstepped its bounds of power.

With this in mind, the southern states understood “that whenever any form of government becomes destructive of these ends, it is the Right of the People to alter or abolish it, and to institute new government…as to them shall seem most likely to effect their Safety and Happiness.” The “ends” here brings us to the next point. Slavery was an institution of the slaveholding states – an evil one, but an institution nevertheless.

Let us set aside the moral issue with slavery because every sane American agrees that slavery is wrong, and let’s look at what the “end” of slavery, as an institution, was, which in this case the intention was for, ultimately, economic ends. When the northern states threatened and even openly attacked the institution of slavery, the South saw it as an attack against their economic prosperity and therefore interfering in the southern states’ independence, in other words, their state rights were being encroached. Now, whether slavery was actually economically prosperous is another story – at the time it was believed to be economically beneficial.

The “Children of the Confederacy Creed” plaque sits in the Texas State Capital building and should continue to do so. The history of the Civil War is also our Texas history and should be remembered as such. We should continue to learn the horrors of slavery so we may never again repeat it, and we should never regard history as a simple glance of a document but should study it with all its complexities and sometimes hard-to-find truths. The Left would like you to believe that history is the struggle of the victim and the aggressor, but history is not as simple as that by any means. They would use mob tactics to make you believe their vision of history is the correct one, and that all “aggressor” history must be erased for the good of society, but to do so would be a fool’s errand and an utter misunderstanding of humanity.

What we should truly take away from this is that slavery is an evil that we must never repeat again, that history is more nuanced than the Left would like you to think, and that once you give in to the mob you should never be surprised that they are not satisfied.