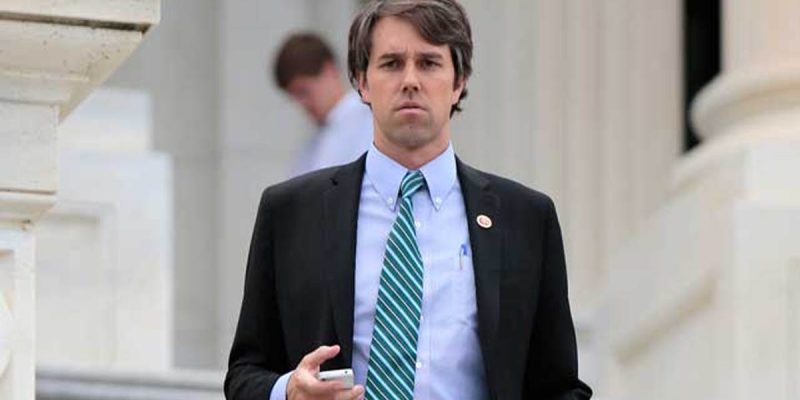 With the 2018 midterm elections over and done, people are looking to the distant looming 2020 elections. The biggest question on everyone’s mind, conservative and liberal alike, is, “Who will be the Democratic candidates for the presidential race?” Many see El Paso’s Robert “Beto” O’Rourke as a worthy contender and possessing the ability and resources to run a presidential campaign. It isn’t hard to see why this US Representative of El Paso appears presidential, O’Rourke portrays himself like Barack Obama did when he was running: a young, harmless leftist with absolutely no relevant political experience.

Robert Francis “Beto” O’Rourke (D-El Paso) is currently finishing out his term as the US Representative for the 16th District of Texas, after a narrow loss for the senatorial seat of US Senator Ted Cruz to which Cruz won by only 2.6 percentage points. The race was expected to be a close one, but not as close as it turned out to be. It seems O’Rourke’s sizable fundraising exploits using lots of small donors from across the country and his digital advertising campaign, and more importantly, his grassroots ground game brought a Democrat closer to winning a statewide race in Texas in more than almost thirty years.

Beto O’Rourke relied heavily on the Saul Alinsky ground game, which Barack Obama had adopted for his own presidential runs and was also used later by Donald Trump in 2016. It is now the universally used system of organized neighborhood teams that coordinate knocking on doors and distributing political literature as a means of informing voters. Saul Alinsky (1909 – 1972), first a member of organized crime in Chicago, used these criminal tactics to run and organize political activism and political races. He had developed a system that used localized community groups into a canvassing apparatus. Obama adopted these tactics and brought them into the game.

Now, everyone – at least in the Democrat Party – uses it for campaigning and the results speak for themselves: first, a nobody Illinois senator becomes the US president for two terms and then second, a showman multibillionaire with no political experience becomes the US president. The grassroots ground game is the ideal system to get to the undecided and the non-voting voters out the door to vote, and it was these voters that Beto connected with this past election.

Beto O’Rourke also surprised everyone when he made the claim that he would finance his campaign, not with Political Action Committees but, solely on small donations. Staying by this claim, Beto raised $80 million dollars in small donations, the largest amount ever raised in a statewide political race. It was so much, even other Democratic races in other states asked for financial help from Beto’s campaign, but he refused.

However, Beto didn’t exactly keep to his word of financing his campaign by small donorship alone, as was revealed when a filing to the Federal Elections Committee showed that Beto accepted last-minute help from Texas Forever, an Anti-Cruz super PAC funded by Senate Majority PAC which is aligned with Senate Minority Leader Chuck Schumer and his work to get Democrats elected in higher offices. Texas Forever did not have to disclose their help before Election Day, because it was formed after the date required to reveal donors before November 6th. Just days ago it has also become clear that Beto O’Rourke had spent nearly all of his raised funds, leaving only $477,000 unspent. Hardly enough to fund a presidential race, but it seems very likely Beto could still become a Democratic presidential candidate in 2020 despite this.

Even during the senatorial race, Beto’s top supporters began to call for his presidential run if he were to lose the senatorial race. “Beto 2020” became a popular saying nation-wide among the Left. When Robert De Niro was asked by Bloomberg News who he would like to run as the Democratic challenger to Trump in 2020, he replied that “This Beto O’Rourke seems interesting.” However, O’Rourke told his supporters during the race that he would not be running for president if he lost the senatorial race. He has recently changed that claim, after losing the senatorial race, and says he may now be considering a presidential bid. Beto even met with Barack Obama in DC, November 16th, when Obama’s aides reached out to the congressman because they were enthusiastic about a Beto presidential campaign. And recently Beto received the backing of an important fundraiser, who had helped Barack Obama before in his own presidential runs. Using this nationwide recognition, it would be simple for Beto to establish a national apparatus of support.

As the days go by, an O’Rourke 2020 presidential run seems more and more likely. Now the question that remains here is whether Beto can galvanize the national Democratic Party behind him against such presidential hopefuls as Joe Biden, who is very entrenched into the liberal elite beaten only by the Clintons. We shall have to watch and see what happens in the countdown toward the 2020 elections, but we must be steadfast. Beto O’Rourke seems to be able to sway the undecided voter to himself much like Obama and Trump before him, and that can be the real clincher in this upcoming election. It’s important to debunk the assertion that O’Rourke is a political moderate choice when we know that it is false. We’ve lost a few of our voters, losing the House majority is evidence of that, and we’ll need to bring them back. We must fight tooth and nail for our rights because it is the Left that wants to take them away and all we have to do is surrender an iota and they will have won.