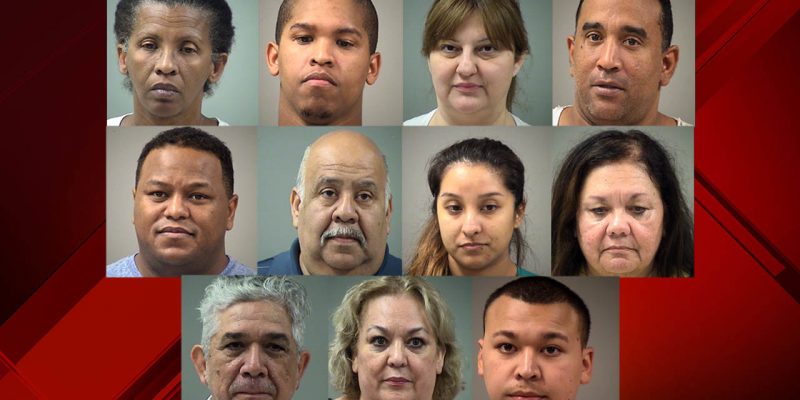 Bexar County Sheriff’s deputies responded to several calls complaining about neighbors who were sacrificing live animals in their garage and front lawn in the suburban far west side of San Antonio.

The deputies arrived to find dismembered carcasses, goat heads, and someone draining the blood of a chicken into a container.

They arrested 11 people who were standing in a circle in the garage of a middle-class home in the 11400 block of Bronze Sand Road, said Johnny Garcia, a Bexar County Sheriff’s Office spokesman.

“It appears that they were having some sort of unknown ritual,” Sgt. Elizabeth Gonzalez said.

The people who were arrested told the deputies that they were performing ritual sacrifices “for religious purposes,” the police report states.

Many neighbors had called the police, the San Antonio Express-News reports, stating they were worried that animals were being sacrificed at the residence.

WOAI News reported that the people who called said they could see people inside the garage using knives and sacrificing the animals.

“They were speaking a language the officer did not recognize,” Gonzalez said, who was fluent in Spanish and English.

More animals, both alive and dead, were strewn around the inside of the house, according to the Express-News.

Those arrested face animal cruelty charges, which are Class A misdemeanors.

Prior to this another animal abuse case involved Jose Reyes, who was convicted and sentenced to three years probation for animal abuse in a case where he was accused of killing three sheep in Hialeah Gardens.