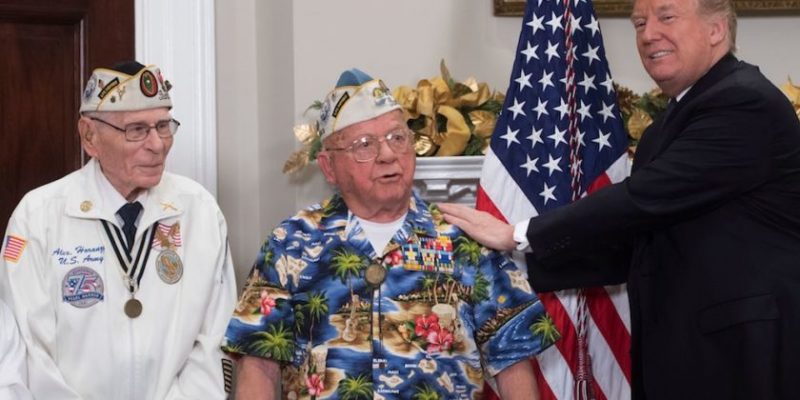 In case you missed it, this is one of the sweetest videos of a veteran singing, “Remember Pearl Harbor” at the White House when President Trump signed a proclamation making December 7 “Pearl Harbor Day.”

This year was the first time no survivor of from the USS Arizona attended a memorial. The Washington Post reports: “But on Friday, for the first time in more than seven decades, no Arizona survivors were present at Pearl Harbor when officials commemorated the 77th anniversary of the attack.

“The greatest loss of life occurred on the USS Arizona: Of the 1,512 on board at the time, only about 300 survived. The ship rests, sunken, at the bottom of the harbor — along with the remains of hundreds of victims.”

On Dec. 7 1941, just before 8 a.m. local time, Japanese warplanes attacked Pearl Harbor in Hawaii. Despite a radiogram that was sent to all U.S. military in the area (“AIRRAID ON PEARLHARBOR X THIS IS NO DRILL“), the attack destroyed or damaged more than a dozen American ships and hundreds of aircraft.

The attack on Pearl Harbor by the Japanese killed more than 2,400 Americans.

The oldest living survivor of that day recently passed away:

We are saddened to hear the oldest living Pearl Harbor veteran, Ray Chavez, has passed away at the age of 106. We were honored to host him at the White House earlier this year. Thank you for your service to our great Nation, Ray! pic.twitter.com/CA7Xdcxz89