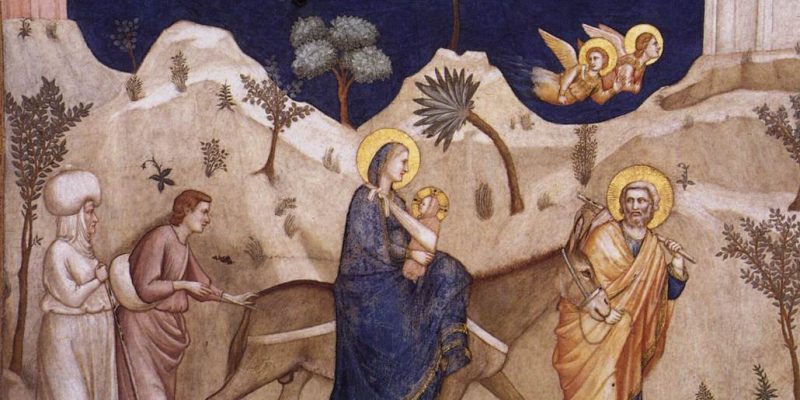 Rep. Gutierrez is similar to a mini me modern-day Herod– and his duplicity about mass genocide of babies is astonishing.

Let’s get a few things straight.

No– baby Jesus is not comparable to the illegal migrants being trafficked by globalists.

No– the biblical story of Jesus’s birth, which Christians celebrate at Christmas and year round, has nothing to do with the Border Wall. (By the way, the Roman Empire built walls– many of which are still standing today.)

The Illinois Democrat used the entirety of his time at the House Judiciary Committee hearing to trash Department of Homeland Security Secretary Nielsen, calling her a “remorseless” liar for repeatedly claiming that the department does not have a family separation policy. (It did under President Obama.)

“It is repugnant to me and astonishing to me that during Christmas, a time in which we celebrate the birth of Jesus Christ — a Jesus Christ who had to flee for his life with Mary and Joseph,” Mr. Gutiérrez said. “Thank God there wasn’t a wall that stopped him from seeking refuge in Egypt.”

“Thank God that wall wasn’t there and thank God there wasn’t an administration like this or he would have, too, perished on the 28th, on the Day of Innocents when [King] Herod ordered the murder of every child under 2 years of age,” he continued. “Shame on everybody that separates children and allows them to stay at the other side of the border fearing death, fearing hunger, fearing sickness. Shame on us for wearing our badge of Christianity during Christmas and allow the secretary to come here and lie.”

Can he be any stupider?

This is coming from a man who advocates that federal dollars be used to kill babies in the exact same way King Herod ordered? They killed live babies, either with a knife, sword, chopped their heads off or crushed their heads with stones. The Clintons, Obamas, and Democrats like Gutierrez have publicly supported the similar procedure called partial-birth abortion. This is why the procedure is called partial-birth– because a living baby is killed.

Gutierrez votes for the use of federal tax dollars funding Planned Parenthood, which openly violates federal law by chopping up baby body parts and “donating” them to receive millions of dollars in “donations” from research facilities that also receive federal money.

If anything– using Gutierrez’s logic– Trump’s policies are exactly what would have saved Jesus because he opposes abortion– and sex selective abortion– on demand.

Jesus traveled from Bethlehem to Egypt to avoid mass genocide– the very policy Democrats enforce–by funding mass murder of babies who are alive just like Jesus was. If Gutierrez’s policies were carried out Jesus would have been killed long before Herod’s decree– because his mother was a low-income, unmarried teenager. Jesus, would have been a burden to society, an unplanned, unwanted pregnancy, according to the standards expressed by Planned Parenthood, and funded by taxpayer dollars.

If Planned Parenthood existed in the first century there would be no baby Jesus, no Christmas, and no Christianity.

But God, not globalists, is in power. God ordained Mary to have a son, whose name and purpose was known before he was born. Jesus, the Christ child, was named “Immanuel,” meaning “God with us.”

In the New Testament book of Matthew, Jesus’s disciple explains how Jesus’s flight to Egypt was a fulfillment of biblical prophecy– “Out of Egypt I called my son.” (Hos. 11:1)

Jesus’s flight to Egypt had absolutely nothing to do with government policies– other than that Herod’s policy being part of God’s plan.

Despite the ongoing murders committed by Planned Parenthood and politicians like Gutierrez who support it, God is in control of history. Even before Jesus was later killed by the Romans, he said he must die in obedience in order to fulfill prophesy. (Matt. 26:53) Even his death, and later his resurrection and ascension, was all under God’s control.

Gutierrez was politically exploiting the birth of Jesus for his own political agenda. His comments are so far removed from the truth that if they weren’t dangerous they would be comical.

His antics were sadly, nothing but a sham– to use Christmas as a way to promote abortionist policies.

Interested in more national news? We've got you covered! See More National News
Previous Article Five Secure Alternatives to get away from GMAIL surveillance
Next Article GURVICH: Best Wishes From The Republican Party Of Louisiana