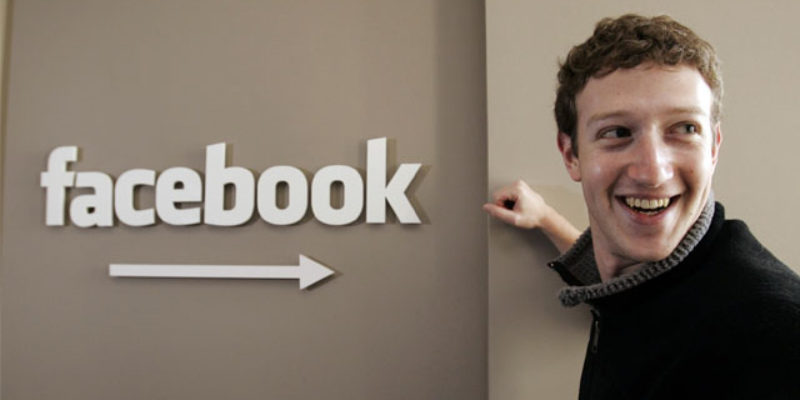 We appear to have something new with respect to Facebook’s attempt to police what people say on its social media platform. As it turns out, if you use the word “tranny” to describe those troubled individuals unable to accept the reality of the plumbing assigned to them by DNA and the divine spirit, you are guilty of “hate speech” according to Facebook’s censors and are subject to being banned.

We have two examples of this… 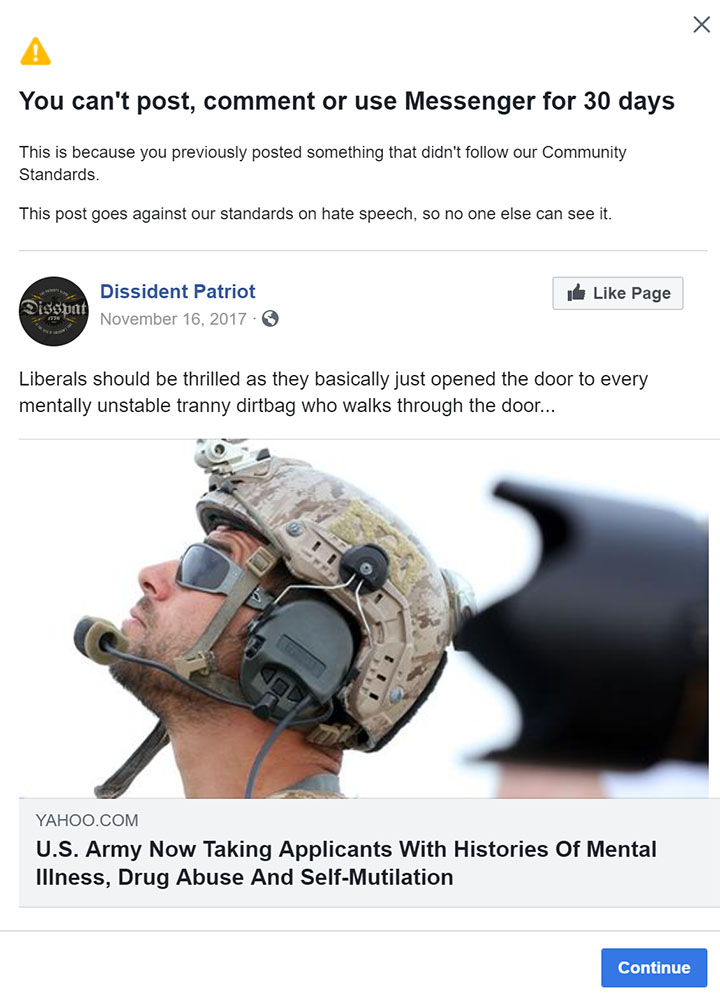 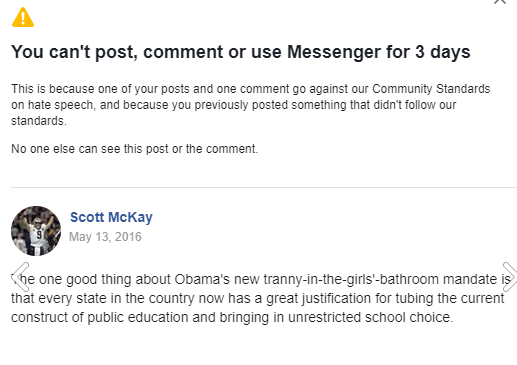 So Facebook is now rummaging through its archives to find the use of words which were not considered verboten when posted, but are now, and imposing punishment on the offenders. Without a directive as to the change in allowable language.

Hayride contributor Kevin Boyd was banned for a week from Facebook last month for using the words “white trash.” It’s an epidemic of censorship which is constraining the use of any colorful language on that social media platform.

And we know that Twitter is worse. On Twitter, for example, you’re not even allowed to point out that current medical science still considers gender to be binary and that a departure from the boy-girl reality is the sign of mental illness – do so and you’ll be banned. You’ll also be banned for “misgendering” and “deadnaming” men who declare they are women.

We’re getting close to dumping Facebook and Twitter – or at least restricting our presence to just posting links to Hayride content on Hayride Facebook and Twitter pages. Using those social media platforms to interact with others puts money in their pockets, and to be censored, banned and treated as undesirable for using language that radical leftists in their content curation departments suddenly find offensive makes such action hard to justify. Particularly when both platforms have made it difficult to promote content through social media sharing with changes to their algorithms over the past year.

We’re looking for something new in social media. So far that Next Big Thing hasn’t emerged – largely because of anticompetitive practices by companies like Facebook and Google whereby anyone creating an application which might grow to compete with their platforms is quickly issued a big check for his or her work and sent on his or her way. Should the rumors of an antitrust action by the Trump Justice Department next year pan out, those buyouts will likely cease due to advice from corporate lawyers at those companies, and the developer of the next app that would be bought out will instead bring it to market to compete with the big social media players.

But in the meantime there are competing platforms. We’re intrigued to a degree with Gab (gab.ai if you’re not familiar with it), not so much because we like its platform, which is essentially a poor man’s Twitter, but because of its corporate stance on free expression – which is spot on. On Friday, the management of that social media platform put out a communique we thought was an excellent statement on what social media should be (and the current reaction of the corporate world to that ideal)…

Gab.com operates according to one principal rule: if speech is allowed under the First Amendment of the U.S. Constitution and our User Guidelines, it is allowed on our site. This is because, per Sir Stephen Sedley in the seminal English free speech case DPP v. Redmond-Bate, “freedom only to speak inoffensively is not worth having.”

We are proud to have recently met our fundraising goal of $1.07m raised directly from The People. We have made considerable progress this month making Gab the home of free speech, free association, and the free market online. This includes an update to our mute system that gives more control to individual users to shape their own experience. Unfortunately we still have not been able to get a new payment processor, although we are accepting checks to our PO Box and will be integrating bitcoin as a payment option shortly.

On a daily basis, our company uses the protection afforded by the First Amendment, federal data privacy law, and American global hegemony to provide a utility for users all over the world, wheresoever they might be, to publish their innermost thoughts and engage in open dialogue without fear of recrimination from unfriendly and repressive governments. Put another way, we structure our affairs to afford all our users the full measure of due process rights available in the United States.

As a result, Gab is now the fastest-growing social media platform in the world. We have acquired over 800,000 users and new Gabbers are joining the site at a rate of nearly 100,000 a month from across the planet. Gab has over 10.6 million visits a month and is quickly becoming a home for those who wish to think, speak, and express themselves freely.

One unintended consequence of our moderation policy is that Gab has attracted, shall we say, a colorful user base. Most if not all of the team, from the CEO down to our external contractors and service providers, can find an enormous amount of content on the site which we each find morally or politically objectionable, even personally hateful.

However, we understand that adopting a moderation policy that mirrors the First Amendment will result in users of our site expressing views with which we disagree, including “the thought that we hate.” See Matal v. Tam, 582 U.S. ___ (2017). We do not, unlike virtually every other social media company in existence, think we have any right to try to change what our users think.

The mainstream media strongly implies that Gab’s provisioning of a forum for this speech runs the risk of encouraging expression “(escalating) from online speech to real-world action.” We dissent. Hateful speech may be found on every platform with millions of users, including Twitter and Facebook; Gab is not alone in this regard.

Furthermore, we actively monitor the site for speech that crosses the line from the merely outrageous into the truly threatening or unlawful. Where criminal activity is brought to our attention, we act swiftly to curtail it and, where possible, cooperate with law enforcement to ensure our users’ safety – real, physical, safety, not wishy-washy millennial “safe space” safety – is secured.

When one creates a space where controversial speech is permitted, controversial speech should be expected. This is only news for anyone who doesn’t understand what “free speech” actually means. And today, Gab stands as the largest social network in the world that willing to take the heat involved in standing by this oldest and most classically liberal principle of liberal democracy.

We follow the American tradition to the letter. We will continue to do so as long as the company exists.

In our experimentation with Gab we’ve seen plenty of content which is goofy, unhinged and even sinister – but the only real way to defeat bad speech is with more speech, not less.

It seems the proprietors of Gab get that, which for right now is enough to make us root for them – and against the social media giants who are now disturbingly attempting to act as the Thought Police.