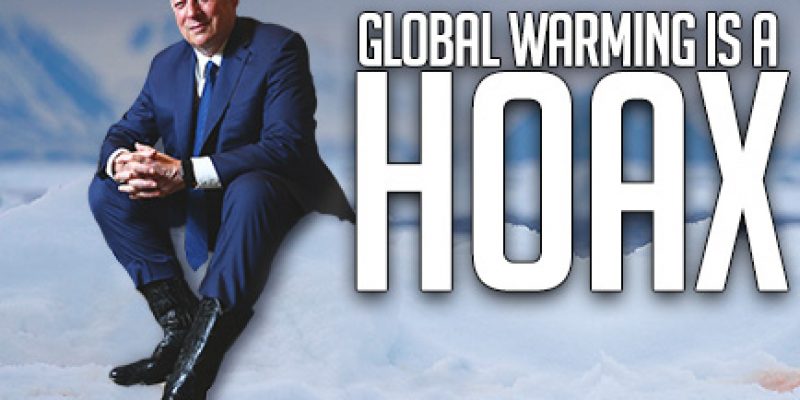 Five days ago the polar ice caps should have melted in the North Pole, according to a prediction made by former Vice President Al Gore on December 13, 2008.

On December 13, 2008, the self-proclaimed climate change expert warned that before Christmas 2018 the North Pole would completely melt because of “global warming.”

“The entire North ‘polarized’ cap will disappear in five years,” Gore told an audience in Germany, according to ZDF News.

“Some of the models suggest that there is a 75-percent chance that the entire north polar ice cap – during some of the summer months – could be completely ice-free within the next five to seven years,” Gore announced in his video.

In 2006, Gore warned, “Within the next 10 years, the world will reach a point of no return [and] a true planetary emergency [due to global warming].”

The Arctic is still full of ice and snow. And science proves the exact opposite of Gore’s claims. “According to the Danish Meteorological Institute, there has been no trend in Arctic sea ice for the past 12 years,” WND reported.

Gateway Pundit’s Jim Hoft argues that “Gore had been predicting [this] dire scenario since 2007. That means that the North Pole should have melted completely five years ago.”

Hoft also pointed out that parts of the globe are cooling, not heating, as he and fake news purport. “This year, it snowed in South Africa,” Hoft said. “It was a blizzard.”

Despite evidence disproving his claims, Gore plans to host a broadcast special on television on Dec. 20 about climate change, the new term used for global warming. WND reports that Gore will host a 24-hour broadcast special on climate change and televised in more than 125 countries on Dec. 20 called “24 Hours of Reality: Protect Our Planet, Protect Ourselves.” The event will featuring celebrities like Moby and the Goo Goo Dolls.

Gore’s 2006 Oscar-winning film, An Inconvenient Truth, made eight predictions that never came true. Ten years after his bogus movie, In January 2016, the Blaze debunked all eight false claims made by Gore.

False claim #1: Sea Levels Are Rising At An Alarming Rate. Not true. The Blaze explains, “In his movie, Gore predicted that sea levels could rise six meters (20 feet) with the melting of the Antarctic and Greenland ice sheets. Now, we know that the South Pole is gaining more ice than it’s losing. Also, a great amount of the losing is due to underground heat. As for Greenland, its melting cycle doesn’t seem to have changed much. In fact, it seems to be quite regular. And the sea level has been increasing … at a steady level since we started recording them. But if the rising sea level is so catastrophic, why has Gore bought a beachfront mansion?”

False claim #2: CO2 Is The Control Knob For Temperature. Not True. The Blaze explains: “Like most climate cultists, Al Gore firmly believes that carbon dioxide – what you are exhaling – is what controls temperature. And climate models have constantly reflected that reality. Unfortunately, “it’s the sun, stupid” to paraphrase Bill Clinton. Indeed, satellite data show no increase in temperature for nearly 19 years despite a constant increase in CO2. The Sun, on the other hand, might have a much larger role in the Earth’s climate – so much that some scientists are talking about a significant cooling because the Sun is “quieter.” And of course, climate models have miserably failed – even compared to the (very probably) tampered NASA data.”

False claim #3: Hurricane Katrina Was Man-Made. Not true. The Blaze explains, “Two years before Gore released his movie, New Orleans had been devastated by Hurricane Katrina. At the time, many people believed that this would be the new norm because of global warming. Now, Gore was partly right: damage to New Orleans was man-made. It was caused by a dire neglect of the levees protecting the city. And their improvement might not be enough to withstand another Katrina. As for Katrina being the new norm, Gore is wrong once more. No F3+ hurricane has landed on U.S. soil since Wilma in October 2005 – the longest such “drought” ever recorded. Have Obama’s actions on climate helped? Or was there no problem in the first place?”

False Claim #4: Severe Tornadoes Are Increasing. Not true. The Blaze explains, “Along with hurricanes, climate cultist logic teaches us that other extreme wind events like tornadoes will be on the rise. However, it’s not blowing very strong. F3+ tornadoes have been declining for over 60 years. Also, the overall number of tornadoes has been unusually low in the past three years. It does have an upwards trend, but that’s because we have better tools to detect them.”

False Claim #5: Polar Bears Are Dying. Not true. The Blaze explains, “The North’s favorite mascot in going extinct according to America’s green pope. Because the ice is getting thinner because of global warming, they can’t reproduce. A recent picture of a sick polar bear also “proved” that point.  Of course, this is hot air too. There are more polar bears now than when Al Gore was born. The government of Nunavut, along with Inuit hunters, have also noticed that the polar bear is doing quite well.”

False Claim #6: The Arctic Is Melting. Not true. The Blaze explains, “The polar bears are (supposedly) disappearing because their playground, the Arctic, is melting fast. Gore even predicted its complete melting for 2014. Now that we know it’s not true, here is one more inconvenient truth about the North Pole. It’s gaining ice, and 2015 saw the largest refreezing in over a decade.”

False Claim #7: The Sahel Is Drying Up. Not true. The Blaze explains, “The region south of the Sahara Desert is one of the poorest places on the planet. And because of global warming, it’s getting drier and drier, according to the Gore. This is not true. As shown by satellite images, the Sahel is, in fact, one of the regions that gained the most flora density since satellites exist. All of that is due to the reviled CO2, which acts as a fertilizer.”

False Claim #8: CO2 Is Pollution. Not true. The Blaze writes, “Finally, no climate cultist nonsense would be complete without uttering their favorite lie: CO2 is carbon “pollution.” Therefore, we must fight to control it to protect our children, save the planet, stop kitten massacres, etc. But as shown above, more CO2 is desirable. In fact, agriculture seems to profit greatly from increased carbon “pollution” as shown by yields. But if CO2 does need to be controlled, then liberals might think twice about organic farming.”

Interested in more national news? We've got you covered! See More National News
Previous Article Alexandria Ocasio-Cortez announces ‘self-care’ break before 116th Congress begins in January
Next Article BRIGGS: And Then There Were Three In The 2019 Louisiana Governor’s Race