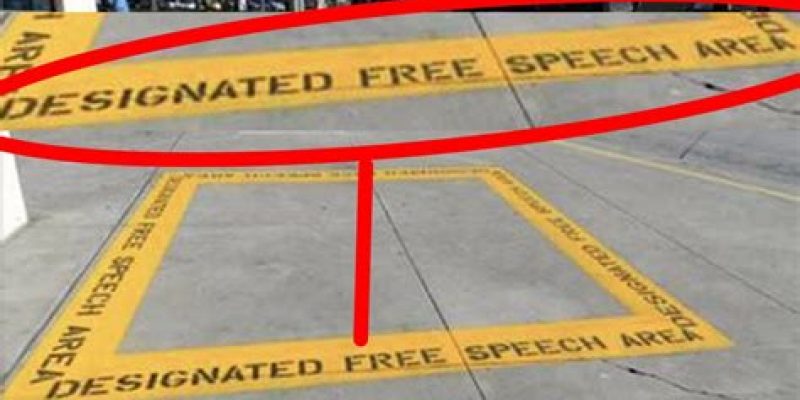 Ninety percent of public and private higher education institutions in the U.S. restrict the speech of their faculty and students, according to a new report produced by the Foundation for Individual Rights in Education (FIRE).

Despite some areas of improvement, FIRE found that “universities continue to investigate and punish students and faculty over protected expression.”

“Most colleges impose burdensome conditions on expression by maintaining policies that restrict students’ free speech rights,” said FIRE Senior Program Officer Laura Beltz, lead author of the study. “Colleges should be a place for open debate and intellectual inquiry, but today, almost all colleges silence expression through policies that are often illiberal and, at public institutions, unconstitutional.”

The report, “Spotlight on Speech Codes 2019: The State of Free Speech on Our Nation’s Campuses,” claims that too many colleges in the U.S. “fail to live up to their free speech obligations in policy and in practice” by implementing speech codes that restrict expression protected by the First Amendment. It lists the findings of 466 colleges’ and universities’ written policies that protect or restrict freedom of speech, freedom of association, due process, legal equality, religious liberty, and sanctity of conscience.

“Freedom of speech is a fundamental American freedom and a human right, and there’s no place that this right should be more valued and protected than America’s colleges and universities,” FIRE maintains. “A university exists to educate students and advance the frontiers of human knowledge, and does so by acting as a ‘marketplace of ideas’ where ideas compete. The intellectual vitality of a university depends on this competition – something that cannot happen properly when students or faculty members fear punishment for expressing views that might be unpopular with the public at large or disfavored by university administrators.”

Reasons to suppress speech may be political or could be designed to avoid controversy, FIRE suggests. The report points to historical evidence, listing possible causes, noting that schools adopted speech policies in response to state or federal laws or policies.

The institutions surveyed include 362 four-year public institutions and 104 of the nation’s most prestigious private institutions. Research focused primarily on public universities because they are legally bound to protect students’ right to free speech and have been successfully sued in court when they have infringed on them.

Notably, the percentage of private universities that earned a red light rating fell below the 50 percent mark for the first time since FIRE began conducting the survey in 2009. Red light schools also declined by nearly 50 percent since 2009, the report notes.

“Many states have made incredible strides toward eliminating speech codes – whether that’s through collaboration with FIRE, legislative action, or nudging from peer institutions,” Beltz said. “In other states, too many students are left to fend for themselves to protect their rights against policies that – whether explicitly or covertly – erode student expression.”

Historically, the Supreme Court has identified exceptions to speech protected by the First Amendment, including incitement to immediate violence, “fighting words” (face-to-face confrontations that lead to physical altercations), harassment, true threats and intimidation, obscenity and defamation. If the speech in question does not fall within one of these exceptions, FIRE notes, “it most likely is protected speech.” However, FIRE lists examples of how exceptions “are often misapplied and abused by universities to punish constitutionally protected speech.”

One misapplication is the implementation of “Free Speech Zones” by roughly ten percent of America’s higher education institutions. The zone policy limits student demonstrations and other expressive activities to confined out-of-the-way areas on campus. They are more prevalent at public universities than private, by a margin of 12.7 percent to 2.9 percent, respectively.

Florida’s bill, most recently signed into law in March 2018, was based on the Campus Free Expression (CAFE) Act model legislation proposed by FIRE.

The law states, “A public institution of higher education may not designate any area of campus as a free-speech zone or otherwise create policies restricting expressive activities to a particular area of campus.” It also stipulates that individuals have the right to sue a public higher education institution in Florida if it violates the expressive rights guaranteed by the law.

In addition to the trend of schools shifting their policies and their rankings from red to yellow or yellow to green, FAIR notes more are also adopting free speech policy statements modeled after the University of Chicago statement adopted in January 2015. Known as the “Chicago Statement,” produced by the Committee on Freedom of Expression at the University of Chicago, 53 schools have adopted policies affirming its principles.

The statement guarantees “all members of the University community the broadest possible latitude to speak, write, listen, challenge, and learn,” and makes clear that “it is not the proper role of the University to attempt to shield individuals from ideas and opinions they find unwelcome, disagreeable, or even deeply offensive.”

FIRE was founded in 1999 by University of Pennsylvania professor Alan Charles Kors and Boston civil liberties attorney Harvey Silverglate after they received acclaim for their 1998 book, “The Shadow University: The Betrayal Of Liberty On America’s Campuses.”