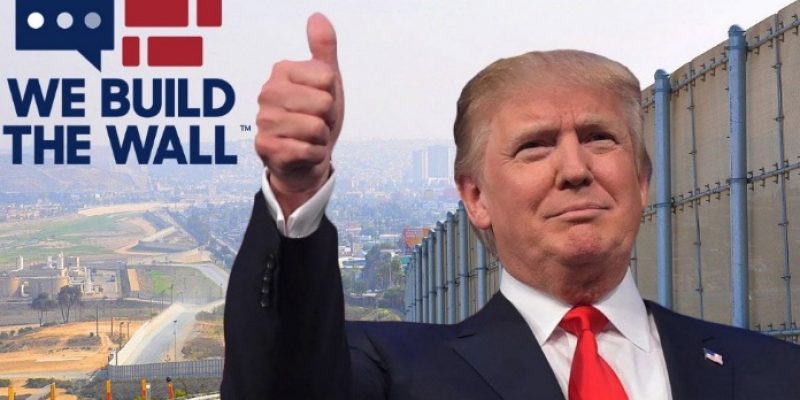 On the first day of the 116th Congress, Republican Congressman Glenn Grothman introduced “The People’s Border Wall Fund Act,” which would allow the money Kolfage has raised to fund the building of the border wall.

“As a veteran who has given so much, three limbs, I feel deeply invested to this nation to ensure future generations have everything we have today,” Kolfage states on We the People Will Fund the Wall GoFundMe.com site.

To date, more than 343,500 people have raised more than $20.5 million to fund the border wall. The stated goal is to raise $1 billion, one-fifth of what President Trump has requested from Congress.

“If the 63 million people who voted for Trump each pledge $80, we can build the wall,” Kolfage said. The amount would approximately total the $5 billion projected to build the wall.

Rep. Grothman’s bill would create a trust fund within the U.S. Department of Treasury to allow public donations to be deposited and used for the design, construction and maintenance of a U.S.-Mexican border wall.

Grothman stated the bill “would allow the American people to actively take part in making America safer by allowing them to personally fund the construction of a wall on the southern border.”

“For too long, illegal drugs, guns and criminals have poured over our unsecure southern border,” Grothman said. “Concerned Wisconsinites frequently ask me if there is a way they can personally contribute to the funding of a border wall. As it stands now, there isn’t. That’s why I am proud to answer the call of Wisconsinites in the Sixth District and introduce this bill that will fulfill their request to strengthen national security.”

The proposed legislation stipulates that the Department of the Treasury would be required to notify the public of the existence of the account, along with the current amount of funds and total amount donated over time.

In the 115th Congress, U.S. Rep. Warren Davidson, R-Ohio, introduced a bill that would allow funds from the account to solely fund the construction of the border wall. It was referred to the House Ways and Means Committee.

U.S. Rep. Steven Palazzo, R-Miss., introduced the “Border Bonds for America Act,” which would allow U.S. citizens to purchase revenue bonds from the U.S. Treasury to fund the building of a border wall. He said the bill “is a safe investment into the infrastructure and security of our country,” comparing it to the World War II-era bonds that helped fund the war effort.

Kolfage pledges that 100 percent of donations will solely go toward funding the border wall.

Kolfage reports that in addition to the campaign being censored on Twitter, he and his family have received death threats. An update on the campaign page states that anti-wall individuals are “calling for the death of my wife and children.”

This article was first published on Watchdog.com.

Interested in more national news? We've got you covered! See More National News
Previous Article Thanks To LaToya Cantrell, The City Of New Orleans Has Created The Easiest Profit Opportunity Ever
Next Article WAGUESPACK: You’ve Got To Engage In 2019