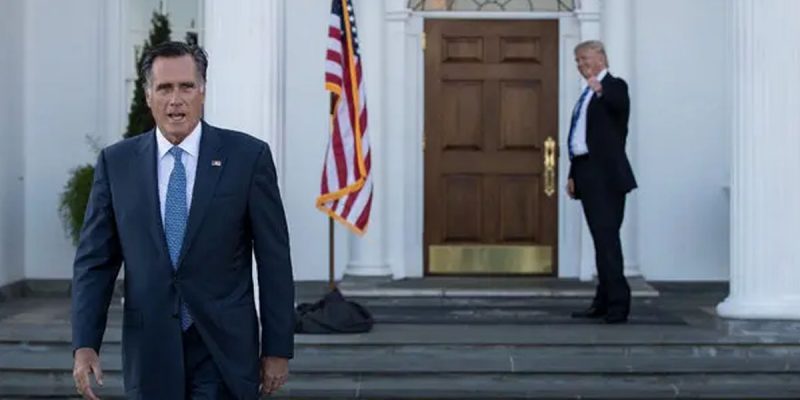 If any of Mitt Romney’s Utah voters were under the impression that the new junior US Senator was going to spend his time in office advocating for state priorities or focusing on constituent services, they can forget it as his term is shaping up to be a sad “I could have done it better!” tour.

Two days before taking office, the 2012 Republican presidential nominee penned a piece for the Washington Post sniping at President Donald Trump and reminding the Republican Party why it took him so long to close the deal in the primaries against a cash-strapped, skeleton Rick Santorum operation.

It was a move out of Alexandria Ocasio Cortez’s “Look at me! Look at me!” playbook.

Was the column motivated by presidential ambitions?

Probably not, as Hillary Clinton has a better path to the White House than Romney.

Anyone remember seeing any “Don’t Blame Me I Voted for Mitt” bumperstickers in 2013?

Some conservatives saw it as a RINO political move  to undermine the Republican Party’s more conservative identity in the post-Bush era but that’s unlikely the case for if there is anything we have learned about Mitt Romney in his 16 year political career, the man really doesn’t consistently feel strongly about much beyond his own superiority as a manager.

This was Mitt being Mitt- the smug, self-centered, arrogant politician who wants to remind everyone how much of a better president he would’ve been…and will never be.

Remember his infamous London stopover during his tour of Europe and Israel prior to the 2012 Republican National Convention?

While visiting the site of the summer Olympics, a reporter asked the GOP standard bearer his take on how the London games were being run.

Rather than being complimentary in a city run by a conservative mayor, the future aspiring Secretary of State chose to undiplomatically nitpick and speculate whether London was adequately prepared, citing concerns over security.

Romney was publicly mocked by Conservative London mayor Boris Johnson, being compelled to backtrack his comments though the damage was done on the VERY first day of his grand tour intended to demonstrate his deft diplomatic skill.

Rather than using the opportunity to heap praise on London, Romney had to indirectly turn it into how he did things better in Utah.

After losing a presidential bid he should have won (and being fleeced by a bunch of establishment Republican “confidence men”), Romney had to make himself the center of attention throughout the 2016 presidential race.

Taking a jackhammer to Ronald Reagan’s “Eleventh Commandment,” Romney delivered a scathing speech more fitting for the keynote spot at the Democratic National Convention roasting Donald Trump’s candidacy and personally, calling him a phony and a fraud.

Even after Trump secured the party nomination, the previous nominee was not done.

Romney not only refused to publicly endorse Trump (continuing a family tradition as his father George Romney wouldn’t support Barry Goldwater in 1964) but rented his mail list to saboteur independent candidate Evan McMullin (whose goal was to deny Trump enough Republican votes in order to facilitate Hillary Clinton’s election) and then wrote-in his wife Ann for president.

Romney’s critique could not have made life pleasant for his niece Ronna Romney McDaniel, who was elected chairwoman of the Republican National Committee with President Trump’s blessing and is up for re-election for another two-year term in a few weeks.

Gratitude has never been a strong point for Romney, not so privately mocking the girth of New Jersey governor Chris Christie- the former Massachusetts governor’s first high-profile supporter in the 2012 primaries.  And after teasing backing for Newt Gingrich, Trump surprisingly endorsed Romney prior to Nevada’s caucuses.

When Orrin Hatch began to ruminate about possibly not seeking re-election to the Senate, it was with good reason President Trump tweeted encouraging words for the dean of the Republican caucus to seek an eighth term, though to no avail.

Trump knew what was going to happen if Romney got the seat, and Mitt has met those low expectations.

With Jeff Flake gone from the Senate and an increasingly diminished and irrelevant John Kasich out of office next week, perhaps Romney sees himself positioned to be the “go to guy” for Washington media seeking a Republican to regularly kneecap his party just so the “almost president” can feel relevant.

Though in doing so, Romney will assume not the mantle of “wise statesman” but “useful idiot” for the Left.

It’s going to be a most annoying six years courtesy of the naïve voters of Utah.