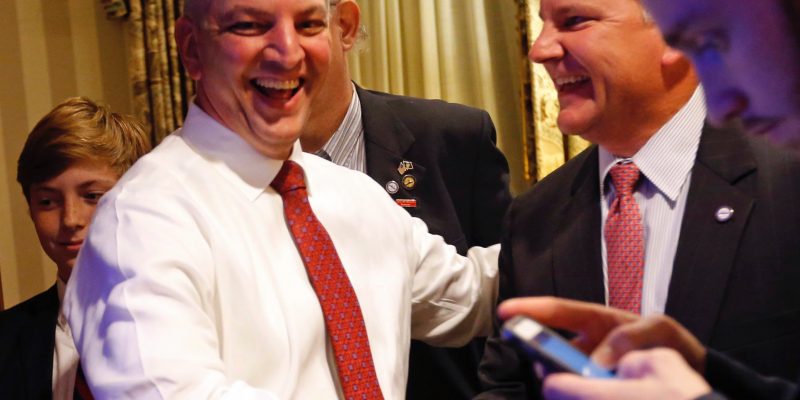 The campaign claims that final finance numbers will show that Edwards raised $3.77 million and that John Bel for Louisiana will begin 2019 with $8.38 million in the bank.

Two Republicans are vying for the chance to unseat the lone Democrat in the deep south whose election is still seen as an anomaly by many Republicans.

A staff member from Rispone’s campaign provided The Hayride with a quote and memo containing their most recent fundraising numbers:

“Republican Baton Rouge businessman Eddie Rispone has $5,513,159 cash on hand in his campaign war chest to begin his 2019 gubernatorial bid.

“Today, Eddie Rispone reported over $5.6M in campaign funds, more than any candidate who ran last time. In a race that will cost over ten million, we believe that Eddie Rispone, the only conservative outsider running, is well positioned to beat John Bel Edwards.” – Campaign Spokesperson Anthony Ramirez

Dr. Abraham’s campaign has not yet released fundraising numbers but one does not get elected to Congress and re-elected twice without fundraising skills. We will learn more about his early fundraising success when finance reports are due on February 15.

Republicans hope to coalesce behind one candidate sooner than later to avoid friendly fire and to direct resources toward John Bel.

In a recent interview, Republican operative Scott Wilfong said, “We’re going to try to do what we can to winnow the field down to one… We’ve already got a plan to try to look ahead and settle on one candidate ultimately… “At some point, we would like to see one of them get out.”

Given the circumstances, it would be ideal if Rispone would invest his $5 1/2 million into a super PAC in support of Congressman Abraham who fared slightly better in recent polling. In fact, polling showed that even with limited name recognition, that Abraham is already tied with Edwards.

The election will be held on October 12 with a November 16 runoff scheduled to take place between the top two candidates if none of them get more than fifty percent of the vote in the primary.

You can visit the candidates’ Facebook campaign page by clicking their name below: