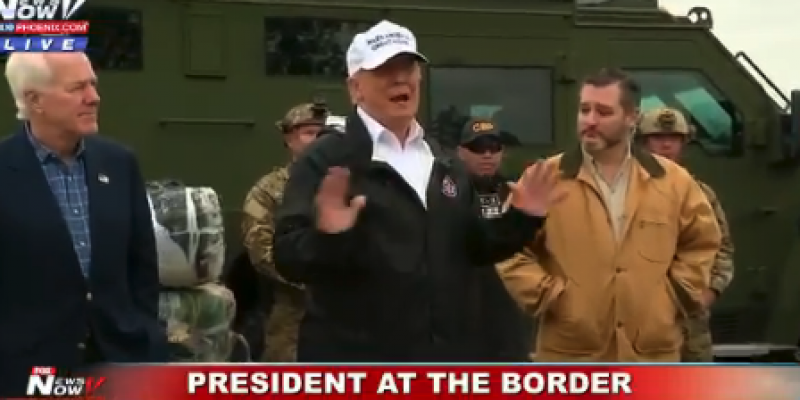 In McAllen, Texas, President Trump visited a border patrol station where border patrol agents briefed him about the situation at the border.

President Trump meets with Border Patrol agents in McAllen, Texas, and thanks them for their tireless work to keep our country safe: pic.twitter.com/sDHmkcEgAi

Border agents expressed support for building a border wall or barrier. One showed an image of a tunnel illegal immigrants had carved — under a wall.

This border patrol agent in Texas is mostly presenting examples to President Trump of smugglers who have tried to move drugs and people through ports of entry… also a tunnel under existing wall. pic.twitter.com/MwwW5NtKXt

Trump called border patrol agents heroes and expressed his support for their efforts.

"I just want to say you have a friend in this administration and a friend in me." https://t.co/1QHVGTRFOZ pic.twitter.com/tu71ZPinH3

This is what our #BorderPatrol Agents encounter DAILY at the south Texas Border.

And a Texas landowner offered President Trump his belt buckle– as a gift for his son, Barron.

“He’s bribing the president!” joked Trump, looking at the cameras. “Can you imagine? I want this to be out in the open everybody!”

Texas Rancher whips off his giant belt buckle and gives it to Trump as a present for his son Barron Trump.

Trump said he was trying to "bribe" him with the belt buckle.

“You can give it to your son Barron,” the rancher replied.

“I don’t know if this is worth ten cents or $50,000,” Trump said, holding up the gold-colored buckle to examine it. He then took it and gave it to his aides.

While in Texas, President Trump explained again how Mexico would pay for the wall. He said:

Democrats, the president said, “don’t give a damn” about crime, or people coming into the country and stabbing Americans. Mr. Trump said a steel barrier or wall would pay for itself every three or four months, and explained that Mexico is paying for the wall “indirectly.”

“The only way you have a strong border is you have a wall or steel barrier,” the president said.

Shutdown negotiations disintegrated Wednesday when Speaker of the House Nancy Pelosi said Democrats won’t support funding for the wall and President Trump walked out of the room, saying “bye-bye.”