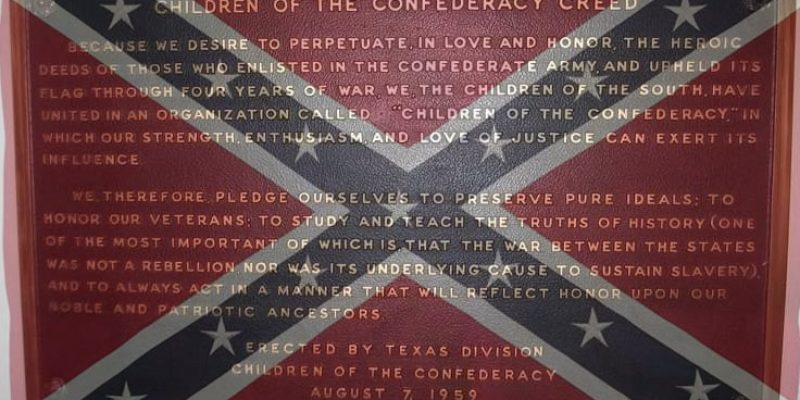 A small plaque memorializing the Confederacy, located behind a stairwell in the Senate wing of the Texas Capitol, went from relative obscurity to one of those rare issues on which Texas legislative leaders moved swiftly and decisively on a controversial and prominent social topic.

By comparison: Last session’s Texas Privacy Act did not benefit from that kind of unity nor alacrity. The Texas Privacy Act, derisively referred to as “the bathroom bill,” was a proposed remedy to President Barack Obama‘s Title IX mandate to allow biological males in girls’ showers, locker rooms, etc. in public schools and government buildings. The bill became the victim of a session-long stalling effort (no pun intended). Though listed as a priority of Republican Gov. Greg Abbott and strongly championed by Republican Lt. Gov. Dan Patrick, blockade efforts by then-House Speaker Joe Straus (R-San Antonio) and then-Calendars Committee Chairman Rep. Byron Cook (R-Corsicana, who, like Straus, did not seek re-election) all-but ensured the bill’s death.

(Sidenote: protecting “the privacy and safety of women and children in spaces such as bathrooms” received 90 percent of the vote on the 2018 Republican Primary ballot as part of a list of non-binding referenda, and also easily entered the state GOP platform once again.)

This session, Lt. Gov. Patrick said the battle over privacy in intimate spaces has already been won (the often-untold story is that President Donald Trump rescinded Obama’s federal changes in 2017), and legislators from Austin’s Sen. Kirk Watson to Speaker Dennis Bonnen have called the bill a “distraction.” It’s probably dead.

Now back to the Confederacy plaque: it features the creed of the Civil War descendants organization Children of the Confederacy (see photo for the text). Crafted in the 1950s (a time in which the final eye-witnesses to the War Between the States were dying and a renewed wave of memorials on both sides of the Mason-Dixon line were being erected), the plaque has from time-to-time drawn the ire of persons opposed to the idea that the Civil War was anything more than a war over slavery and only slavery (and none of that States’ Rights stuff). It gained media exposure in May when Rep. Eric Johnson (D-Dallas) publicly questioned which body has the authority to remove the plaque. U.S. Rep Beto O’Rourke commented on it while on the campaign trail during his unsuccessful bid to unseat Ted Cruz, drawing some national mainstream media interest.

The plaque removal issue could have easily been ignored by Republicans and stalled in a similar manner to the Texas Privacy Act last session. Alas, the usual suspects, including Land Commissioner George P. Bush, kept it in the forefront.

Momentum for removal built over the last week when newly elected House Speaker Bonnen joined the chorus calling the plaque “historically inaccurate.” Bonnen tapped recent Texas Freedom Caucus expatriate Rep. Jeff Leach (R-Plano) to sit on the State Preservation Board (a six-member board consisting of the Governor, Lieutenant Governor, a House member, a Senator, the Speaker, and a citizen member which oversees state historic property). On Friday, the vote was unanimous for removal, though the plaque is still attached to the wall at the time of writing.

Although the plaque removal issue was settled in lighting-quick fashion early in the session (Day 4, no less) the issue over removing Confederate-honoring memorials is far from over, and could end up being the “bathroom bill” of 2019.

One candidate for such a legislative donnybrook is Senate Bill 226 by Sen. Pat Fallon (R-Frisco) which forbids school districts and local governments from changing names or removing longstanding monuments, and gives the Texas Attorney General authority to enforce violations. If passed, the bill would put a stop to other attempts to remove “inaccurate” memorials across Texas.

Following the horrific Charleston shooting there has been a spate of name changes to institutions named for Confederate heroes and monument removals across the country. Texas has been no exception, and some of the hastily removed statues weren’t even Confederates at all (e.g. Gov. Jim Hogg and U.S. President Woodrow Wilson, though both celebrated Southern Democrats — guilt by association?). A gargantuan statue of Robert E. Lee on horseback was removed from a park in Dallas, though General Lee was an advocate for reconciliation and peace following the War.

Another bill, House Bill 583 by Rep. James White (R-Hillister), also aims to protect monuments. This bill, however, strikes the phrase “Confederate States of America” in existing statute and replaces it with heroes of any conflict of Texas or the United States (which, we would presume, includes Civil War engagements).

Either bill may not stop the big 3 from pulling a Nikki Haley regarding any of the other memorials to the Southern cause or soldiers on state Capitol grounds, but could potentially keep local governments from kowtowing to similar pressure. If the bills are allowed to leave committee (chairmen have not yet been appointed) these bills could take up as much bandwidth and media ink as last session’s moral scrimmage — and the conservatives would not be to blame this time.