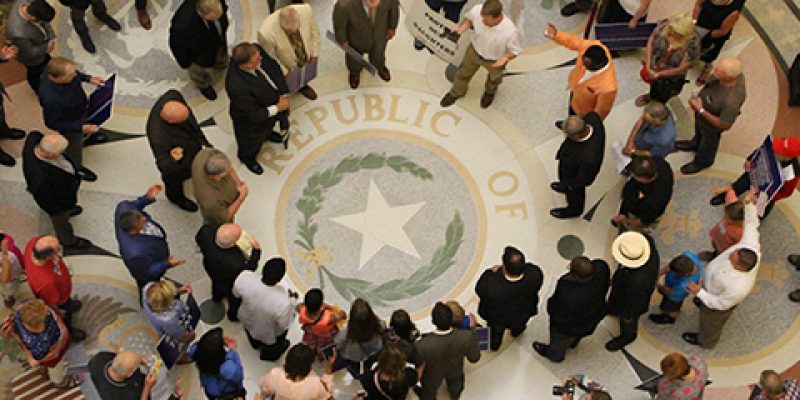 According to Texas Values and video evidence when over one hundred Texas pastors attempted to meet with Texas State Representative Byron Cook’s office about the Texas Privacy Act they found the door locked and the staff hiding inside.

On Thursday, August 3rd a rally was held with many pastors and faith leaders in support of the Texas Privacy Act also known as the “bathroom bill” that would address transgenders use of bathrooms and changing rooms. As part of their rally, they planned to meet with many of the representatives’ staff and claimed to have had general success.

While visiting the offices they presented the following letter they claim was signed by more than 1,000 Texas pastors in support of the “bathroom bill.”

A large contingency of pastors also marched down to see Rep. Byron Cook’s staff who chairs the State Affairs committee which has yet to hold a public hearing on any version of the bill. When they arrived the staff was inside and the door was locked. According to Andy Hogue, the staff claimed the door was locked because the pastors were beating on the door. Hogue refutes this, but the video starts too late to prove who is correct. One must wonder why the pastors would bang on the door if it were not already locked when the pastors reached it.

The group of faith leaders then stood outside the door and began chanting “Let the House vote” in reference to the stalled bills.

“I’m grateful for Texas faith leaders who value the privacy and dignity of Texas women and girls, and are standing up for us,” said Nicole Hudgens, Texas Values Policy Analyst and a speaker at a rally preceding the visits. “We can no longer allow political correctness or the bullying of big business to diminish the worth of our girls. It is time for the Texas House to find their courage and bring this legislation to the House floor for a vote.”

The event was co-sponsored by Texas Values Action, the Texas Pastor Council, Vision America, and Texas Right to Life.