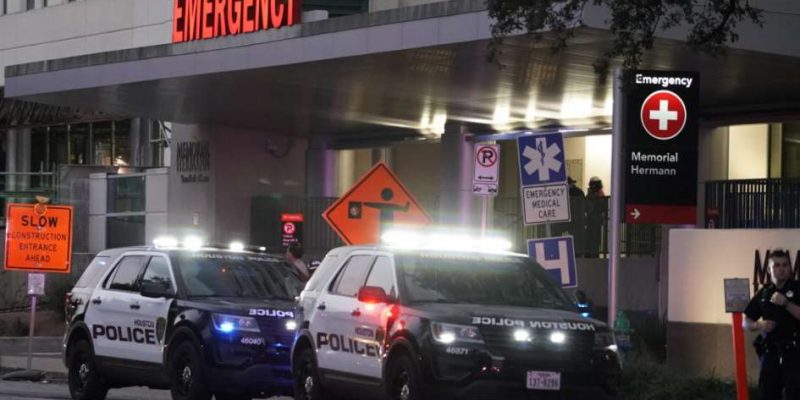 Four Houston Police Officers are in the hospital after a shootout at a suspected drug house that ended in the deaths of both suspects.

Two of the officers were reportedly shot in the neck and rushed to surgery in critical condition. The other three are reported to be in stable condition. Initial reports assumed the fifth officer was shot but he appears to have sustained a knee injury.

Officers were executing a search warrant in Southeast Houston after a neighbor reported drug dealing including “black tar heroin”.

Narcotics officers backed up by patrol officers announced themselves to the suspects and immediately came under fire.

The Houston Police Department confirmed that both suspects were killed in the gunfight.

“This evening’s horrific attack on police officers is a solemn reminder of the service and sacrifice our brave men and women in law enforcement make every day to keep us safe. The city of Houston and the Houston Police Department will have whatever state resources they need to bring swift justice to those involved. I ask all Texans to join Cecilia and me in praying for the officers injured, and for the continued safety of all law enforcement officers who protect our communities.”

“Pray for these brave officers and their families. They go into harm’s way so that our communities can be safe. God bless them.” – Congressman Dan Crenshaw

“Praying for the down officers in Houston .. please let us know if we can help …. anything you need.. God bless your families we are standing by … Txfrog” – Marcus Luttrell

“Heart broken. My thoughts and prayers are with our police officers and their families.” – Alex Bregman

“Thinking about the officers involved and hoping that everyone is going to be alright.” – JJ Watt

UPDATE on our officers: one officer shot in the shoulder has been released. 2 officers in critical condition & 2 others are in good condition. None of them will be released from the hospital tonite. One of the officers sustained a knee injury & isn’t believed to have been shot.