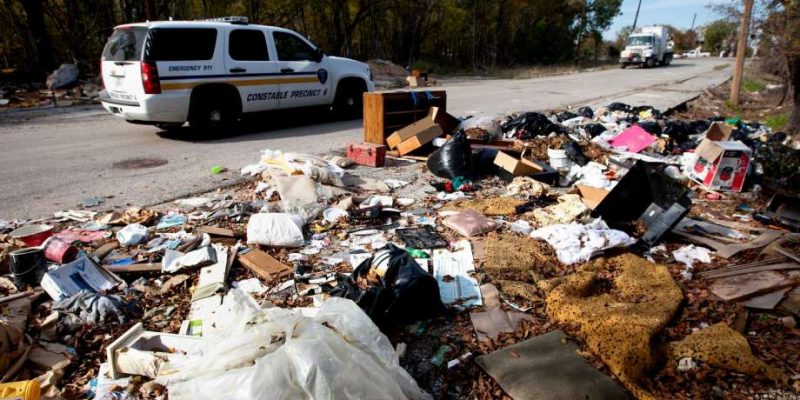 Texas property taxes are among the highest in the nation, and Houstonians’ property taxes have increased by more than 50 percent, yet the City of Houston is unable to pick up garbage in many of its neighborhoods.

For nearly ten days, many of Houston’s residential streets have been full of trash and recycling bins that have not been collected.

“We’re failing as a city,” said City Council Member Mike Knox, who added that his own yard waste has been awaiting pickup for so long that the biodegradable bags have begun to decompose, the Houston Chronicle reports.

Yet the city has already spent $1 million on overtime pay for mechanics who are working day and night to fix 16-year-old trucks.

New trucks that were ordered won’t arrive until August.

Since mid-November, when delays really began to pile up– no pun intended–employees clocked hours of overtime pay totaling $948,000 dollars. On a recent evening shift, mechanics stayed at the Northwest Service Center until 1 a.m., the Chronicle reports. The next shift arrived at 5 a.m.

To deal with the situation in the short run, City Council voted this week to spend $5 million on a stop-gap measure to pay a private company, Texas Pride Disposal, to pick up trash and recycling. The City is renting 50 trucks from the company to offset the losses due to 16-year-old equipment failures.

“In January, we approved the purchase of 69 pieces of equipment, and that equipment is coming in, in August,” Turner said.

Turner said Texas Pride Disposal will take over about 10 recycling sites across the city, which will free up city crews and hardware to be redeployed to other areas.

Turner said drivers from the Public Works Department with commercial driver’s licenses were being used elsewhere– to fill the driver vacancies at the Solid Waste Department. The Chronicle reports:

Solid Waste has been trying to recruit new hires to reduce the current staff workload. But the proposal to spend millions for the help of a private recycling company underscores how difficult it has been for the city to compete with the private sector. The average base hourly rate in Solid Waste for the operator of a sideloader, the automated vehicle that picks up recycling and trash, is $18.89. The average rate for a waste collection driver nationwide, according to federal statistics, is 9 percent higher. Hayes said he’d seen an uptick in the number of workers leaving Solid Waste for the private sector.

Councilman Robert Gallegos, of District I, voted against the measure. Instead of using $5 as a temporary measure he proposed using it to buy more equipment. “It just doesn’t make sense to spend over $5 million for an expensive band-aid,” he said.

The Fleet Management Department recommends that the city replace 25 trash and recycling trucks a year. Instead, 62 were bought in 2007, followed by over a decade of insufficient replacements. In 2008, 2013 and 2017, none were purchased.

Houstonians will still have to wait for trash pickup. Once the contracts with the private recycling vendor and equipment rental contracts are approved, services won’t begin until Feb. 1.

Five new garbage and recycling trucks recently arrived; 20 are due by the end of February, and another 12 in May. The recent order for 26 more should arrive in August.