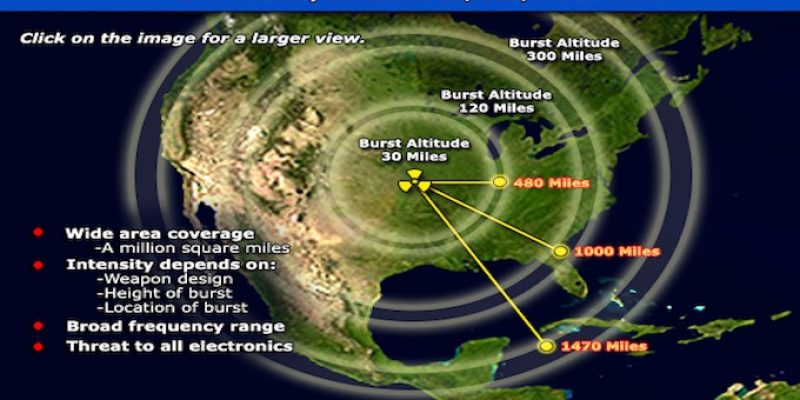 A new military study suggests that an EMP attack is likely. An electromagnetic pulse (EMP), also called a transient electromagnetic disturbance, is a short burst of electromagnetic energy. It can be man-made and occur as a radiated, electric, or magnetic field or a conducted electric current.

Scientists and Pentagon analysts warn of mass starvation if the electric grid — in a moment — ceases to operate and the refrigerator, or other aspects of food supply, fail.

OneNewsNow reports that the Pentagon as been addressing the likelihood of an EMP attack for years but the executive director of the EMP Task Force says the civilian grid has been ignored.

Dr. Peter Pry describes an EMP to OneNewsNow as “a super energetic radio wave that can destroy electronics,” which can be initiated by the sun, nuclear weapons, and non-nuclear weapons.

The problem with being unprepared, Pry told OneNewsNow, is there is no “second chance” against such an attack.

“It’s been 10 years since the EMP commission delivered its report and provided a plan” for securing the civilian national grid, Pry said. But the U.S. government hasn’t done anything.

Pry said his team worked for 17 years to create a plan in 2008. Since then, it was ignored. No federal agency is in charge of the problem, he says.

“Not a single implement recommendation of the EMP commission has been implemented in 10 years,” he warns, “and we remain as vulnerable today” as we ever have been. He added, however, that President Trump “is the first president to include in his national security strategy a directive for the federal government [to] protect the electric grid and the other life-sustaining critical infrastructures from EMP.”

Pry also notes that the EMP threat has increased since 2008 because of technology: microelectronics have become faster, and operate on smaller voltage, making them more vulnerable.

Consequently, Pry says, “it takes less and less energy to destroy them, so the very thing that makes us a high-tech society” is also “our technological Achilles’ heel.”