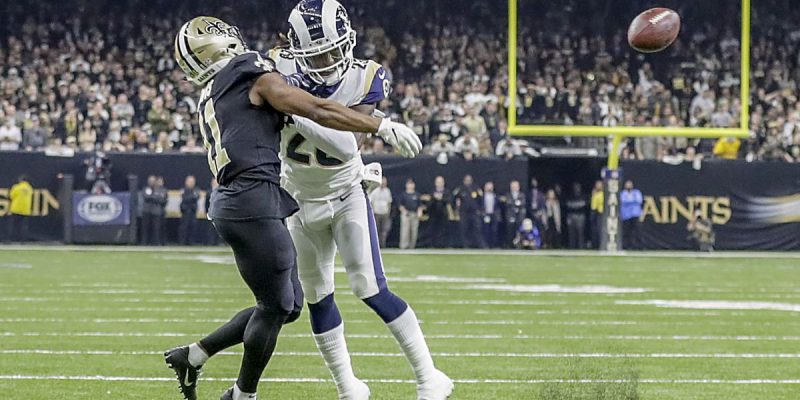 Now four days after the act, the NFL has yet to release a statement offering an explanation why it allowed one of its players to be mugged, beat up, tried, jailed and executed by another of its players, all while a pass was on its way in one of the top three most important games of its season.

So NFL fans are left to wonder what the official staring at the play was thinking, and whether the league feels his no-call was justified.

Surely the latter is not possible. There’s no conceivable way a fair-minded official being paid to call penalties could think that wasn’t one.

So, here are 10 guesses why the side judge ruled the pass incomplete rather than making the obvious call:

9. Had used flag as napkin after eating halftime Dome Dog.

8. Wild and crazy Bill Vinovich had sewn flag into waistband in pregame prank.

7. Was concerned about Roger Goodell losing ground to Satan in “Most Hated Being in America” contest.

6. Felt sorry for Rams cornerback having to spell Nickell Robey-Coleman in kindergarten.

4. Wanted to save flag to add with confetti and make post-game snow angel.

3. Decided to call game with eyes closed, letting the spirit of longtime idol “Papa Bear” Halas be his guide.

Interested in more news from Louisiana? We've got you covered! See More Louisiana News
Previous Article National School Choice Week celebrates opportunity in education
Next Article Can One Support The Death Penalty And Still Be Christian?