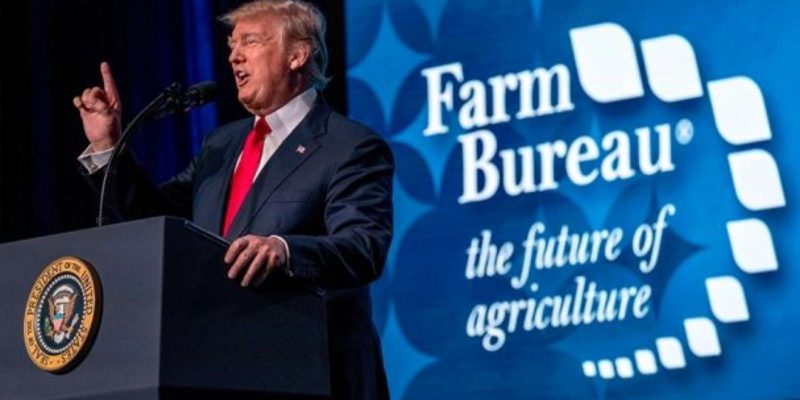 President Donald Trump will visit New Orleans today where he will deliver a speech to the American Farm Bureau Federation’s 100th annual convention.

The speech is scheduled to take place between 11:15 am and 12:45 pm at Ernest N. Morial Convention Center. The event is open to members only.

This will be the second year in a row for Trump to headline the event, doing so last year in Nashville.

The Farm Bureau expects at least 6,000 members to be in attendance.

Drivers should be advised that a large part of Convention Center Boulevard will be closed from 5:00 am to 2:30 pm.

Meanwhile, the Louisiana chapter of the NAACP is planning a protest of the presidential visit beginning at 10:30 am.

The NAACP says it will be “actively protesting President Donald Trump’s visit here in New Orleans, Louisiana because of the government shut down, his racist behavior towards Persons-of-Color, and the constant division amongst the people of the United States of America.”

Excited our state gets another chance to host our Commander in Chief! https://t.co/iAR8LTbLPB

The media reported that Trump accidentally tweeted, and soon deleted, that he will be visiting Nashville for the event, where it was held the previous year.

The event is a political goldmine for the populist firebrand who is widely viewed as one of the most pro-farmer Presidents of modern time.

“We see the promise of tomorrow in the incredible young farmers who have joined us joined us today (and in) students who are achieving incredible things through amazing organizations like FFA and 4-H. … That’s the future of our country. Great young people. Their devotion to our nation inspires us all, it really does.”

“This is your 99th year, so I was very disappointed to hear that. You understand, 100 is so much cooler, I have to be honest, so I’ll be back next year. I’ll come back.”