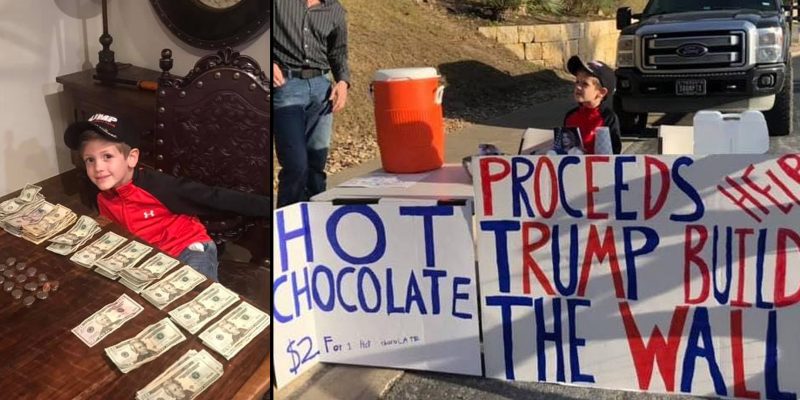 A 7-year-old Texas boy has done more than singe a few tongues with his hot chocolate stand idea. He has burned a few liberal trolls in his notoriously liberal community.

For $2 you can have a cup of hot chocolate and the satisfaction that proceeds will go to help President Donald Trump build the border wall between Mexico and the U.S.

So far, Benton Stevens has raised more around $2,500 in the enterprise (watch video of day one below), but has also found himself the recipient of some backlash from some of his liberal neighbors as well as some un-adult-like behavior.

Young Benton made $231 his first day, but the stand is located in a residential area of the notoriously liberal stronghold of Austin. Benton and his parents had difficulty finding a steady place to set up shop due to the controversial nature of the stand, and took a reaming from angry parents on neighborhood Internet forums — even being called “Little Hitler” once.

After news of the hot chocolate stand blew up on social media, the local media began to take notice, which boosted his sales and extended this far past just a fun idea for a dreary Saturday.

If it wasn’t for the negative reaction, his father Shane Stevens said, it probably would have ended on Saturday.

“The funny thing is, if this wouldn’t have had so many negative comments… chances are he would’ve let this go last night and moved on. What liberals don’t understand about Texans is they don’t run away from false character accusations, especially when they know their right. Benton’s more excited and riled up about it today than he was yesterday.”

“So many happy people coming by to support him. Only minor drama today. One guy came by and said he was an immigrant and does not understand what we have against him. We told him nothing. Ended up having a good conversation and he actually agreed we should have legal immigration/try to cut illegal immigration. Had another guy stop in the road and ask what we have against brown people, I told him Nothing at all. He implied that I lied to him about that and I tried to explain we aren’t racist. Then he called Benton a Fascist, a little Hitler and what not. Jenn [Stevens, Benton’s mother] ‘might have’ gotten a little heated but he ended up driving off. I asked Benton if it hurt his feelings and he said ‘I don’t even know what that means!’ :). He’s begging to do it again tomorrow but I have to work… What I’ve picked up from the people against this is they think the wall will stop legal immigration and asylum seekers. Or that your racist for wanting to secure the border… Just need to educate them that it’s not the case.”

The Stevens family is offering a Venmo account for out-of-town supporters or those that can’t make it by and who would still like to make a donation: @BentonsHotChocolateStand