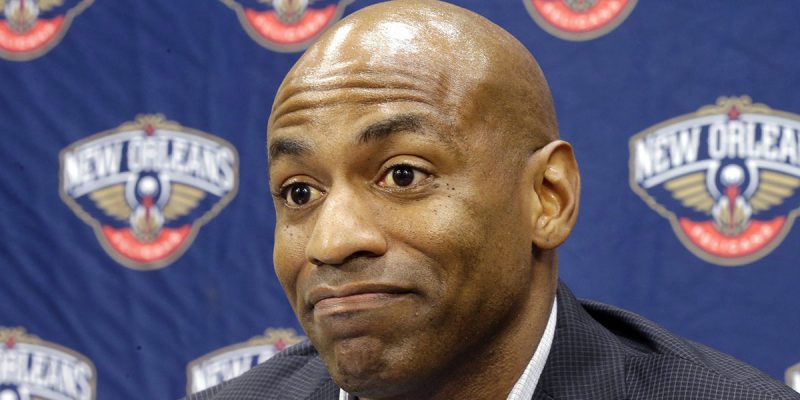 After years of dumping first-round draft picks in trades for mediocre veterans and failing to put a legitimate supporting cast around star player Anthony Davis (leading to what head coach Alvin Gentry termed a “dumpster fire” last night when Davis, who has demanded to be traded and refused a $240 million contract extension with the team, walked out of the Smoothie King Center in the middle of a game), finally the ax fell on general manager Dell Demps this morning.

The New Orleans Pelicans parted ways with general manager Dell Demps on Friday morning (Feb. 15), a source confirmed to NOLA.com | The Times-Picayune. ESPN was first to report the news.

The team letting go of Demps comes as the Pelicans try to navigate the waters in the wake of Anthony Davis’ trade request. Demps and the organization stood firm in rebuffing the push from the Los Angeles Lakers to acquire Davis.

ESPN said whomever the Pelicans hire as their new general manager will continue to “push back” on Davis’ preferred trade destinations and continue to make the best deal for New Orleans’ future.

Davis stayed with the Pelicans through the deadline and has been with the team the past four games. He suffered a muscle contusion in his shoulder in Thursday night’s victory over the Oklahoma City Thunder and left the Smoothie King Center before the end of the game, which didn’t sit well with ownership.

Demps had been the general manager of the team since July 2010, when the team was still the New Orleans Hornets.

Demps’ exit is almost sure to precede that of Gentry, whose performance as the team’s coach hasn’t been great – though in the coach’s defense he’s got the most brittle-boned roster anybody has ever seen, with Demarcus Cousins last year and Davis, Julius Randle, Nikola Miritic (who has since been traded) and Elfrid Payton this year all missing significant time. In fact, but for those injuries one could argue the Pelicans might be wedged well within the playoff picture instead of attempting to ditch games and win the Zion Williamson/NBA Draft lottery this summer.

What’s clear, while one could argue Demps’ primary sin as GM was that of Extreme Bad Luck, is that giving him continued reins of the franchise going into the Anthony Davis trade auction at season’s end simply couldn’t be in the cards. His ouster was inevitable after Davis’ trade demand, as is Gentry’s.

And with a complete rebuild in store, now might be a good time for us to reiterate our old request that Pelicans owner Gayle Benson and vice president Mickey Loomis to put on a full-court press to reel in Kentucky basketball coach John Calipari as either head coach/GM or as head coach with a large say in the hiring of a GM. Calipari would give the team the kind of outsize presence and brand name that it will need with Davis’ exit – if in fact that would be truly necessary, since perhaps Davis might reconsider his desire to leave were his old college coach, with whom he won a national title, to join him in New Orleans.

Calipari wasn’t successful in his first time as an NBA coach, that being a stint with the New Jersey Nets from 1996-99. But that was a long time ago, and his record since, as the coach at the University of Memphis from 2000-09 and at Kentucky from 2009 to the present, indicates he’s a far better coach than he was when New Jersey plucked him out of the University of Massachusetts 23 years ago. But what would really make him an asset is the sheer volume of his former UK players who are among the NBA’s best, and his popularity with them where it relates to potential free agent acquisitions. Calipari currently makes $7.45 million at Kentucky, though, so he would be a giant upgrade in outlay for this franchise (one which would be worth it if he could impose his brand on the Pelicans).